All The Best Moments From The Golden Globes 2016 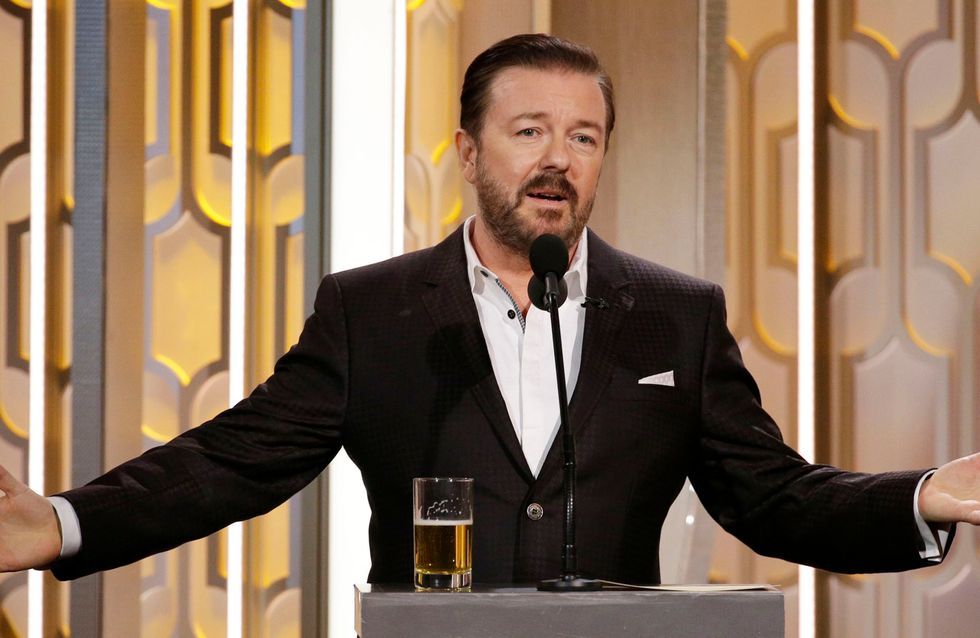 And so the Golden Globes are over for another year. All Hollywood awards ceremonies are guaranteed to be a big event, full of surprises, in-jokes, jibes, tears, laughter and, of course, Ricky Gervais offending everyone. Gone was Amy Poehler and Tina Fey (BOOOO), and in their place was the return of Ricky and his co-host, half a pint of lager. There were new highs and new lows (cough cough, Quentin Tarantino). And then of course, there was Ryan Gosling and Brad Pitt. On stage. Together. Swoon.

Has Lady Gaga let her ruthless American Horror Story character get the better of her? As she walks to the stage to collect her award for Best Actress in a Miniseries, the singer-turned-actress burst past Leo, knocking his elbow that he had propped on the back off his chair off in one swift moment. And the best part? Leo's face! He looks like he's just been told off by a teacher as he giggles and replaces his elbow back on his seat. See the video below.

Yeah, we've started this a bit Leo-centric. But how could we not? The reason why Leo's win for Best Actor in new film The Revenant is so exciting is because it could possibly be a precursor to a big Best Actor win at The Oscars. Plus, he gives a lovely speech, and he doesn't even get phased when they start playing the 'get off the stage' music, and even when they turn it up even louder, Leo carries on, eager to talk about the indigenous people that he encountered on this project and protecting their land. We love ya, Leo!

Jonah Hill dresses as the bear from The Revenant

Perhaps the funniest part of the night goes to Jonah Hill, who dressed as the bear from Alejandro G. Iñárritu's new film The Revenant. He thanked his co-star 'Leonard' as well as Iñárritu for taking a chance on a "two-year-old bear from the Sierra Mountains". The joke came at the right time after rumours began flying that DiCaprio is raped by the bear twice in the film, causing Fox to release a statement strongly denying the claims. Co-presenting the award was Channing Tatum, who asked the bear about DiCaprio - "what did he taste like?" - to which the bear replies "keep it together please", proving that they are the comedy power duo giving JLaw and Amy Schumer a run for their money.

Jennifer Lawrence cleans up big time for Best Actress in a Comedy or Musical for her part in David O. Russell's new film, Joy. "You make movies like you don't even care if anyone ever sees them," she says. "I mean that as a compliment." JLaw beat her bestie Amy Schumer to the top spot for this award, but Schumer is obviously happy for her pal, even if it is her third one..

Jim Carey was in the house to bring the weird last night with his "I am two-time Golden Globe winner Jim Carey" speech. You kinda just have to watch it to get it - see below.

"Cookies for everyone tonight!" said Henson, who plays Cookie in drama Empire, as she literally distributes cookies to stars including Leonardo DiCaprio on her way up to the stage. She won Best Actress in a Dramatic TV Series for her role of Cookie (all those sassy eye-rolls!). After snapping "DON'T STAND ON MY TRAIN" at the guy who helped her up the steps to the stage, Henson then saw that she was being asked to wrap up her speech, she says, "Please wrap? I waited 20 years for this, you can wait!"

Sly Stallone wins Best Supporting Actor in a Motion Picture for his performance in the latest in the Rocky saga 'Creed'. The 69-year-old actor looked... kinda weird, if we're honest with you, but he gave a nice speech. After thanking his wife and his peers with whom he worked on the film, he speaks about how important the father-son dynamic was in this film after losing his son Sage to heart disease in 2012. He wrapped up his speech by thanking his alter ego: "Most of all, I want to thank my imaginary friend Rocky Balboa for being the best friend I've ever had," he said.

"Sush. Shut up, you disgusting, pill-popping, sexually deviant scum. I'm going to do this monologue and then go into hiding. Not even Sean Penn will find me." This was Gervais's opening line. It's kinda perfect, isn't it? Gervais goes on to further humiliate every person in the auditorium before talking about what he likes to do with the three Golden Globes he owns, which includes shoving one up his youknowwhat.

Listen, we've always been jealous of Jennifer Lawrence and Amy Schumer's friendship, but this just rubs their witty repartee it in our faces. They were there to introduce a clip of their films Joy and Trainwreck respectively, and chose this time to make some funnies Hollywood and their relationship. We've discovered our friendship goals for 2016.

Kate Winslet Wins Best Supporting Actress in a Motion Picture - "What an incredible year for women in film." https://t.co/rSwVKQxt29

Even though Kate Winslet has been in the industry and winning awards since forever, she's still as surprised and gracious as ever when it comes to her acceptance speeches. "Is this really happening?" she questions. And also, watching Winslet turn 21 Jump Street stars Channing Tatum and Jonah Hill into giggly awkward school boys is amazing.

What was your favourite part from this year's ceremony? Let us know: @sofeminineUK