Harry Styles and Cara Delevingne back together? Stars spotted on theatre date

He's the best loved pop star on the planet, she's the most coveted super model out there - it just makes sense that they'd hook-up. Harry Styles and Cara Delevingne were spotted together at the Book Of Morman in London by some eagle-eyed fans this weekend. Looks like these exes may be back for round two.

Harry Styles and Cara Delevingne sent One Direction fans into a spin after they were spotted on a date this weekend.

Of course it could have just been a friendly trip, but with faces like theirs we doubt it.

They were seen watching The Book Of Morman in London's West End and one super sleuth snapped them on their camera phone.

One of the photos from behind shows the two sitting together, with Cara's lion tattoo giving away her identity.

But it doesn't look like the best date ever, as Harry's chatting on the phone.

Cara and Harry were first linked last year when he was spotted giving her a lift home from a night out in London.

But the model was reportedly told to dump the pop star because he was too "down market" for the Vogue magazine regular.​

So could this mean the handsome 1D singleton could be thinking about settling down with model-of-the-moment Cara?

​He recently admitted to Fabulous magazine that he does in fact have his eye on someone.

He said: "I haven’t been mingling that much… Touring is so hard and it’s hard to get to know someone in a day.

He also spoke to the Evening Standard magazine about his love life at the premiere for 1D's movie This Is Us.

When asked about being one of the only solo members in the group, he cryptically responded: "Am I single?"

Sounds like an old flame is just what he's after - no getting to know each other necessary! 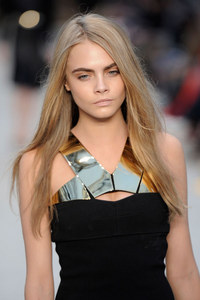 Francesca Menato
…
#hook-up
From hair ideas to outifts, look no further for your daily inspiration