Caroline Flack and Harry Styles came under fire for their relationship when the then 31-year-old dated the singer 14 years her junior. She has recently claimed it was only the fans who had a problem, as his family was fine with the two of them together. Well, Daddy Styles has something different to say about that.

Harry Styles' father has spoken out about his son's former relationship with Caroline Flack.

He decided to make his feelings known on Twitter via a mini rant in reference to a recent interview with Harry's ex older woman.

Hazza's dad is clearly unhappy about Caroline's recent claims that the 1D singer's family had been cool with the relationship, despite the big age gap.

Des Styles used his 140 characters to great effect yesterday when he wrote: "His 'family' and 'parents' supposedly 'weren't bothered' about his thing with Caroline Flack so says she. Nobody asked me? Rubbish! X."

Well that clears that up, then...

Cazza rubbed Des up the wrong way in her recent interview to UK Glamour magazine.

The TV host told the mag: ​"We weren’t bothered and his family wasn’t bothered. But the thing about unconventional relationships is that other people do seem to be bothered."

​She continued: "I mean, look, it was just really fun to hang out… I don’t think we were ever going to have a long-term future. It was fun and it was hurting nobody… [Breaking up] was fine. And now we’re friends."

Since her romance with Harry, Caroline has realised the importance of keeping her love life private.

Also, his 'family' and 'parents' supposedly 'weren't bothered' about his thing with Caroline Flack so says she. Nobody asked me? Rubbish! X

The flack (sorry...had to be done) she received from angry Directioners has taught her to be thicker skinned.

“There are a lot of mean people out there and I think a lot of it’s about developing a thicker skin.

“I just ignore it. Because it’s just embarrassing for them, isn’t it? How embarrassing to be sitting at home behind your computer saying horrible things about someone you don’t even know.”

She continued: “I’m not so self-conscious about what I do or how I look. Now I’m much more: ‘Why do I care what they think?’

“I feel like I take life less seriously. I’ve stopped listening to other people. Anyone who has an opinion and wants to offer it up for no reason. If I want an opinion, I’ll ask for one.”

Sounds like Des gave his opinion without Caroline asking. Awkward. 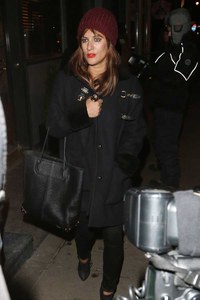