Hunger Games star Josh Hutcherson opens up about his sexuality

Hunky Josh Hutcherson, who was launched into stardom with his role as nice guy Peeta Mellark in The Hunger Games series, has spoken out about his sexuality. ​

In a recent interview with Out magazine, Hunger Games hunk Josh Hutcherson chatted about his sexuality and his openness to being in a relationship with another man, just as long as he is attracted to the person. Naw.

“Maybe I could say right now I’m 100% straight”, says Josh. “But who knows? In a f***ing year, I could meet a guy and be like ‘Whoa I’m attracted to this person’”.
​
Josh has recently been seen locking lips with actress Claudia Traisac and while he apparently loves the ladies, he thinks he could be attracted to men.

​“I’ve never been, like, ‘Oh, I want to kiss that guy.’ I really love women. But I think defining yourself as 100% anything is kind of near-sighted and close-minded.”

Josh’s openness to being gay could come from his stance as an avid gay rights supporter, as he has founded the youth organisation Straight But Not Narrow. This focuses on teaching young adults on how to support their LGBT peers and how to speak out against homophobia.
​
“Sometimes it’s frustrating to comprehend how people are not OK with it,” says Josh.

“If you can try to tell me how it’s hurting you, you’re crazy. You’re absolutely crazy. Like, what do you mean it’s not natural? Even if—even if, which, I disagree, but even if—why the f*** do you care?”

Josh will be back in action as the lovely Peeta Mellark when The Hunger Games: Catching Fire hits our screens on November 22nd.
​
What do you think of this revelation? Tweet us @SofeminineUK 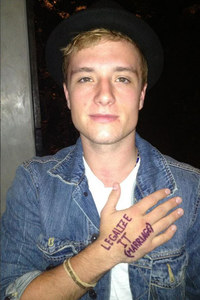 by the editorial team
+
All the news about Josh Hutcherson