If Kate And Wills Were Your Mum And Dad...

A photo of Kate, Will and baby George was released this week, and although we're so in love with this little family (including their dog, Lupo), we can't help but feel envious of the Heir to the Throne who is about to embark on a world tour with his parents. Let's face it, baby George is living a charmed life, and we can't help but wonder what life would be like if Kate and Will were our parents too...

It would basically mean you've won the lottery

Your parents are hotties and you’re Royal and will have taxpayers giving you everything for the rest of your life. It’s annoying for everyone else, but you’ve done WELL.

You’d have one mouthful of a name

Your Great Grandmother would have high expectations of you

Being that you’re third in line to her Throne, we think it’s fair to say the pair would you would have a stuffy relationship. You're almost inevitably going to disappoint. We definitely don’t think she’d be serving you an assortment of tea and biscuits when you drop round the Palace.

You’d get dibs on your Mum’s wardrobe

If you are a girl (or a cross dressing boy) and enjoy stunning designer dresses worn by Britain’s most prolific fashionista, you’re in for a treat. Your mum has the most epic wardrobe the Windsor's have ever seen.

The world would see your parents being lame

While the world loves Kate and Wills, if this twosome are your parents you'd be in for a never ending stream of embarrassment. Whenever your parents engage in a quick smooch or a friendly game of volleyball it will be EVERYWHERE.

You’d get jel of their extra-curricular activities

Kate and William meet and greet A LOT of children. Since youngsters are of a jealous nature, we reckon we wouldn’t be happy sharing our awesome parents with these STRANGERS.

No offence to HRH, but we’d be slightly concerned about the future of our hair if William was our dad. His receding hairline would haunt our dreams each night. We'd be stocking up on Regaine from our teens.

But you might also have the most glossy locks

On the other hand, if Kate was our mum (which she's not)... and we were a girl (which we are), we'd probably have a mane of thick glossy brunette waves. Fingers crossed we’d get that side of the deal eh?

The paparazzi would be a major downside

Awkward phase? Bad hair cut? Spotty chin? Poor outfit choice? All these things happen to us as we grow up, but when you're a Royal there's no escape from having each moment documented for the world's viewing pleasure. Worst of all, those teenage antics and drunken nights out you can’t remember are gonna be perfectly recorded by the paps hanging out outside the club. Not fun.

You’d almost certainly be sent to some uppity school

Get ready to go boffin. Will went to Eton College and Kate went to Marlborough College boarding school so no doubt you'll be a well-educated sort too. And seeing as you’ll be playing polo and hockey and hanging out with the cream of the British crop, you will pick up a most delightful accent too - it will be fabulous!

Your mother would be a national treasure

This would make you a national treasure by proxy, and that’s okay!

William and Kate are as nerdy as you’d want them to be, and they would understand and respect your wish to go to The Wizarding World of Harry Potter every other week. They can’t have all the fun!

Always wanted to do that world tour after school but never got round to it? If Will and Kate were your parents, not only would you see the whole world in stunning hotels, you wouldn’t have a choice! It’s like forcing you to have an amazing time. Must be hard.

Your Uncle would be one handsome devil

The screaming crowds may swoon at the sight of the world’s hottest ginger, but he’d be your Uncle Harry. We like to think he’d take us on day trips to the zoo and Alton Towers. We reckon this has got to be the best part.

Would you exchange your lifestyle for a Royal one? Tweet us @sofeminineUK 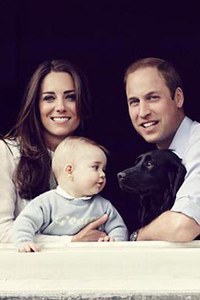