Former Coronation Street star Natalie Gumede quickly became the favourite to win the 2013 series of Strictly Come Dancing. But her dancing dream could already be over as rumour has it that the former soap actress may be too injured to carry on in the competition. Say it isn’t so Natalie?!

We’ve been glued to the latest series of Strictly Come Dancing and so far there’s been one clear frontrunner, former Corrie actress Natalie Gumede.

But it looks like the 29-year-old may not be able to continue in the ballroom dancing competition after sustaining a serious injury during rehearsals.

According to The Mirror, the Strictly favourite fell over while practising the fast-paced quickstep for Saturday’s show with her partner Artem Chigvintsev.

This has not only sparked fears that Natalie will be unable to perform this weekend, but also that her participation in the whole series is now in jeopardy.

The former Coronation Street star - originally tipped to win the BBC1 dance competition - reportedly injured her back so severely that she had to seek medical attention.

It’s claimed that Natalie has been ordered by doctors to rest for 48 hours after having a cautionary MRI scan for a suspected slipped disc and.

A BBC source told The Mirror: “The medical team certainly found some swelling on Natalie’s back.

“She’s planning to see a consultant and is putting her feet up for a few days.

“Everyone is hoping she will still be able to dance, but it is all hanging in the balance at the moment.”

Her professional ballroom dancing partner Artem has since admitted: “We had to finish rehearsals early on Tuesday because of the pain in Natalie’s back - if it is serious she might not be able to continue in the competition."

It was only last Saturday that the ex soap babe stormed to the top of the leaderboard, scoring 36 for her passionate rumba with Artem.

Even the usually acid-tongued Craig Revel Horwood had nothing but good things to say about the couple.

Will you be disappointed if Natalie is permanently out of Strictly? Tweet us @SofeminineUK! 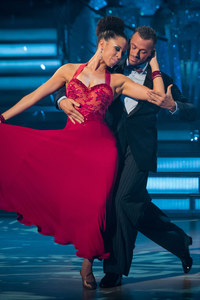 by the editorial team
+
All the news about Strictly Come Dancing