Rumour has it that Kate Middleton is pregnant again! If this report is true, we sincerely hope everyone has remembered where they’ve stored their Union Jack bunting and are ready to organise some street parties, as we will have to celebrate the British way! Could baby Prince George be getting a little brother or sister? We hope the rumours are true!

According the US magazine Star, Kate Middleton is pregnant with her second baby!

Apparently her husband, Prince William, revealed the news to the couple’s friends and family over Christmas whilst at a Palace party, and the magazine also claims that the couple will name the baby Diana if it is a girl. 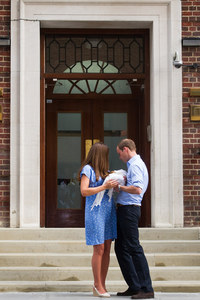 According to a royal insider, Kate wants a little girl this time. The insider told the magazine: “Kate and William will, of course, be happy with a healthy baby or either sex, but Kate is really hoping for a girl this time. She feels a little sister for George would be perfect.”

The 31-year-old had to reveal her first pregnancy back in 2013 after she was admitted to hospital with acute morning sickness, which apparently hasn’t been an issue in this pregnancy so far. However, Clarence House has refused to comment on the story, they said: “We don’t ever comment on speculation like this. There’s always a magazine somewhere in the world that has this headline each month.”

They could have just denied it though…we have our hopes up anyway!

If the rumours are true, the couple certainly will have an awful lot on their plate as they prepare to embark on their Australian tour with their baby, George.

The Sydney Morning Herald reported: “An advance party of royal aides will arrive in Sydney this month to finalise precise details of the expected month-long itinerary.

“One key issue is secure accommodation where the then nine-month-old Prince George, third in line to the throne, can be cared for while the couple meet what is likely to be a gruelling program.”

Do you think that Kate Middleton could be having royal baby number 2? Tweet us @sofeminineUK