Rumour has it that Mila Kunis is pregnant with Ashton Kutcher’s baby and to add fuel to the fire the actress has been spotted sporting very baggy clothing as of late. Can we just take a moment to marvel at how good looking this A-list child is going to be?! Apparently Ashton and Mila are keen to waste no time in starting a family as Ashton’s divorce from Demi Moore was only finalised yesterday.

Mila Kunis has the figure to work pretty much anything – which is why we are getting so excited that she keeps appearing in a series of baggy tops and jumpers. Could she possibly be hiding a little bump?!

According to People magazine, Mila Kunis and Ashton Kutcher have been keen to start a family, and it's something that they have been openly talking about for a while now.

Since the Forgetting Sarah Marshall star's boyfriend of a year and a half Ashton finally divorced Demi Moore after a two-year legal battle yesterday, it sounds like the pair aren't wasting any time at getting serious.

And there are also suggestions that the Black Swan actress might be seeing in the New Year as an engaged girl...

A source said: “They both want kids. It’s something they’re vocal about. I can’t imagine it will be very long before she’s pregnant.”

Even if it turns out Mila has just been a bit chilly as of late, it seems that mini Milas and Ashtons are just around the corner. They will be inevitably so cute!

The insider also revealed: “Ashton and Mila have talked about getting engaged and married for quite a while. He wants to get engaged during the holidays.”

Talk about going from one marriage to the other there Ashton! It’s all very Henry VIII!

Regarding his divorce, a source also told The Sun: “They’re all happy and the papers are signed and with the lawyers now, so Ashton’s free to officially propose to Mila. Both of them want to marry and have children.” 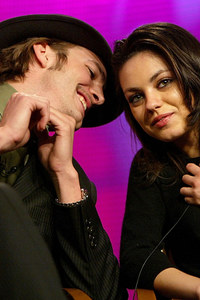