It was thought that Miley Cyrus and Selena Gomez weren’t just pop music rivals, they also weren't the biggest fans of each other, as the former Hannah Montana star has a close friendship with Selena’s ex-boyfriend, everyone’s favourite bad boy, Justin Bieber. However, it looks like the two are actually better mates than we’d imagined, as Miley has recently tweeted Selena to find out where on earth she had gotten to.

Although we always thought Miley Cyrus and Selena Gomez weren’t quite the best of friends because of Miley’s friendship with Selena’s ex-boyfriend, Justin Bieber, it appears the two of them are much friendlier than we’d believed.

Although they are never normally seen together at award shows, with Selena generally glued to her BFF Taylor Swift's side, apparently they are pals, as Miley took to Twitter to send the Come and Get It singer a question, asking: “Where you at?” 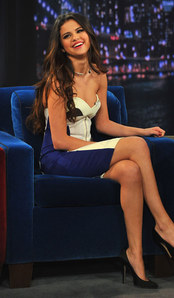 No doubt Selena is incognito following her shocking f-bomb during the KIIS FM charity Jingle Ball.

Perhaps it’s even this fall from grace which has brought the pair of them closer to each other, since a source told RadarOnline back in June that they weren’t friends.

They said: “It was already over with Justin, but seeing him hang out with Miley was the last straw for Selena.

“She’s not a Miley fan by any means and feels like Justin purposely did it just to p*** her off. She’s completely severing ties with him now.”

Well, heaven knows Miley has done enough controversial things this year so perhaps now they have something in common!

Another source confirmed their friendship, and Miley’s disinterest in the Baby singer Bieber, and said: “[S]he's friends with Selena, she's known her since she was a kid and would never break the girl code by hooking up with Justin.

“People talk a lot of crap about Miley, but she really is a sweet girl with a good heart."

Aw, that’s nice! Miley has also been using her reputation as a scantily dressed pop star to support a censorship protest movie called Free the Nipple, which aims to remove the exposure of nipples in films from being classed as an NC-17 rating, which according to the filmmaker Lina Esco, is considered "pornography.”

Miley posed with a giant nipple over her eye, tagging the film’s Twitter handle @freethenipple.

We’re glad you’ve found a cause you’re passionate about Miley!

Do you think she and Selena are mates? Tweet us @sofeminineUK