Poor Jake Gyllenhaal has been rushed to hospital after smashing his hand open from punching a mirror. The actor was on the set of his new film Nightcrawler in L.A. when the incident took place, and was reportedly midway through a scene. Since the 32-year-old needed stitches, that’s seven years bad luck, medical attention, and looking pretty stupid in front of a film crew that Jake now has to deal with. Oops!

Jake Gyllenhaal has needed stitches after cutting his hand open whilst shooting a scene for his new film Nightcrawler.

The Prince of Persia actor was filming an intense moment where Jake is supposed to be talking to himself angrily in the mirror. However, Jake got a little too much into the scene and banged his hands against the mirror, breaking it…and his skin. Ouch!

An insider told PopCrush: “The scene was emotionally charged and his character was talking into a mirror and he got so into it, he banged his hands against the mirror and it broke and cut him."

“It was all about the scene and not because he was mad about anything else.”​

Phew, we thought perhaps Taylor Swift’s We Are Never Ever Getting Back Together, which is rumoured to be about JG - had come onto the radio or something! Apparently Jake received stitches in ER and was back on set later that day as well – Champion.

The Brokeback Mountain actor is truly suffering for his art at the moment. As well as cutting his hand open, Jake has also lost 20 lbs for the role of Lou, a freelance crime reporter in Nightcrawler.

He looked almost unrecognisable at the 17th Annual Hollywood Film Awards in October, telling shocked reporters: “I knew that [Lou] was literally and figuratively hungry, [so I got into the] mode where I was always a bit hungry.

“I think [I’ve lost] probably a little over 20lbs, something like that.”

It’s been a week of injuries for the hunky men of our life, as it has also been reported that Zac Efron’s mouth was wired shut after breaking his jaw. Stop injuring yourselves lads! Wrap yourselves in cotton wool if that’s what it takes, we don’t want to lose you!

What do you think of Jake’s dramatic suffering for his art? Tweet us @Sofeminineuk 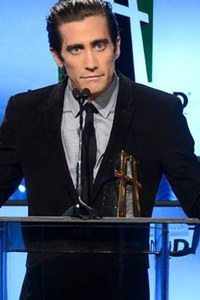