by the editorial team Published on 3 January 2014 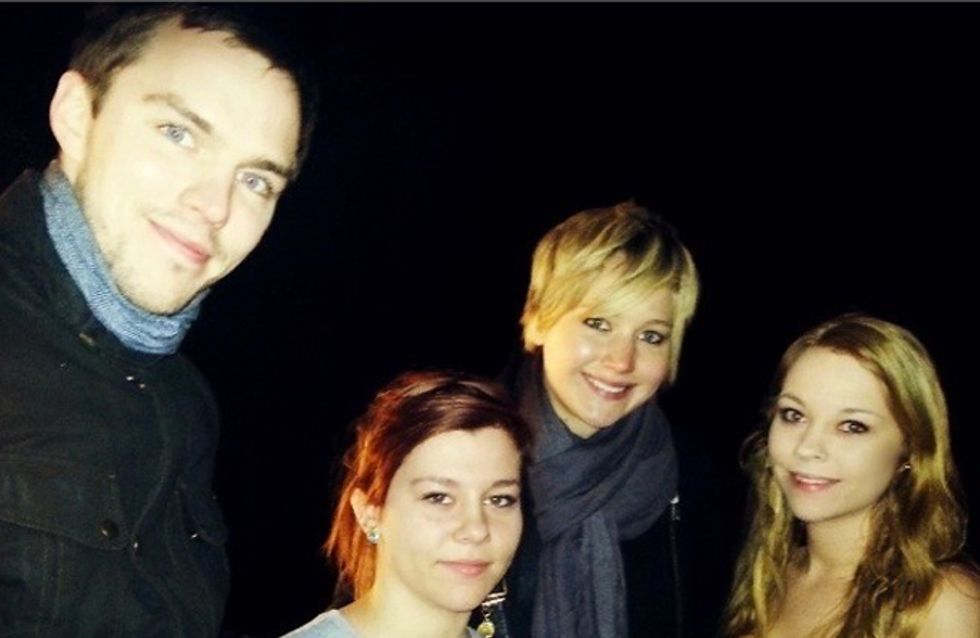 America's new sweetheart certainly had a Merry Christmas. After spending time with family and visiting a children's hospital, Hunger Games' star Jennifer Lawrence took a trip to England visit her X-Men boyfriend Nicholas Hoult. Two very happy fans were lucky enough to snap a picture with the couple right as they were leaving the pub.

Jennifer Lawrence had anything but a lonely, blue Christmas. A picture has surfaced on Twitter of the Hunger Games: Catching Fire star leaving a UK pub with X-Men: First Class flame, Nicholas Hoult, over the holidays.

Jen visited her hometown of Louisville, Kentucky for a few days over Christmas, and made a few sick children smile by visiting a local children's hospital. Got to love that Jennifer.

Then, the American Hustle award-nominated starlet flew over to England to spend some time with her boyfriend Nicholas. They couple enjoyed their time alone together, even making a stop by the Jekyll and Hyde pub in Hook, Hampshire on December 29.

The small town and pub are not far from Nicholas' family home in rural Berkshire, England. The star couple even stopped for a photo outside the pub with two excited fans, including the pub landlord's daughter, Emma Morris, who posted the picture on Instagram.

Emma said in the caption for the photo, "So tonight Nicholas Hoult and Jennifer Lawrence had dinner at my house, no biggie.'

The pair were dressed in casual clothing and seemed to be having a low-key, romantic night out.

The two actors briefly ended their relationship last spring but were soon seen together on several dates over the summer. Nicholas was even seen hanging out at November's Hunger Games: Catching Fire London premiere party.

Over the holidays, Jennifer and Nicholas were reportedly spotted pub hopping on public transportation across the U.K., and even showed up in London and Oxford, where the co-stars first met while filming the movie X-Men: First Class in 2010.

The stars never addressed their holiday trip around the UK, but Nicholas seemed to be particularly cheerful when he tweeted on December 30, "Hope you all had a brilliant Christmas and Happy 2014 in advance, may it be filled with great things for you x."

From all the nominations and awards buzz surrounding Jennifer's role in American Hustle, it seems the actress will definitely be having a happy 2014. The young actress already has one Oscar for her role in Silver Linings Playbook, and her role as a neurotic housewife in American Hustle has been nominated for the Best Supporting Actress Golden Globe.

We now know this couple had a Merry Christmas, and here is wishing them a Happy New Year. What do you think of the pair's romantic pub crawl? Tweet us @sofeminineUK