Jennifer Lawrence and Robert Downey Jr. are among presenters at Golden Globes 2014

The 71st annual Golden Globes are right on the horizon, and the first group of presenters has been announced. The stars to present the prestigious awards are some of our favorite celebrities including Robert Downey Jr., Jennifer Lawrence, Mila Kunis, and more. We're counting down the days 'til Sunday!

Ready to see all of your favorite A-list actors hit the stage for a night of awards? It is that time of year again, and the 71st annual Golden Globes are just around the corner. Now, the Hollywood Foreign Press Association has announced the first group of the presenters for the show, airing January 12.

Most of the actors presenting have known their fair share of Golden Globe success already; Robert, Kevin, Uma, Laura, Colin and Reese have all won a Golden Globe award in the past.

Mila Kunis was nominated for the Best Supporting Actress Golden Globe for her role in Black Swan, and starlet Jennifer Lawrence won Best Actress for her knockout performance in Silver Linings Playbook.

After wowing fans and bringing ratings up 17 percent for the 2013 awards show, comedy duo Tina Fey and Amy Poehler will return to host this year’s Golden Globes.

The pair suggested to The Hollywood Reporter an extension on the popular Golden Globes drinking game the two created last year. Tina says, “Any time you see a gown with sleeves, you’re going to drink. Any time they cut to Tom hanks for a reaction shot, do five push-ups and you will be ripped by the end of the ceremony.” Well, that’s one way to get fit while having fun!

With all that talent on stage, not to mention the award-winners, this is one awards show to watch. The Golden Globes air live on NBC from the Beverly Hilton on Sunday, January 12.

Will you be throwing a watch party this year? Tweet us @sofeminineUK. 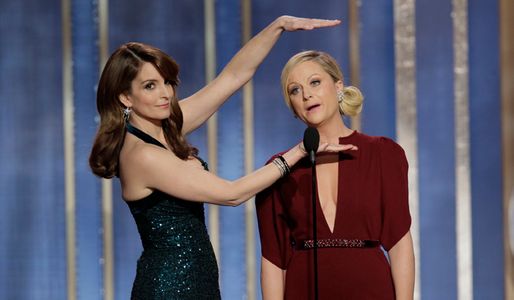