Jennifer Lawrence became Hollywood's new 'It' girl when she was cast as badass Katniss Everdeen in the Hunger Games film adaptation series. In addition to having several hit films this year, the 23-year-old also nabbed her first Oscar in March. The actress was interviewed on American TV as part of The 10 Most Fascinating People of 2013, and J-Law used the opportunity to speak out about the pressure the media puts on young people to look a certain way - go Jen!

We knew we loved Jennifer Lawrence from the very beginning. She's beautiful, talented, funny, and despite her mega success, genuinely relatable.

The blonde bombshell is having the year of her life. She won an Academy Award - her first! - for Best Performance by an Actress in a Leading Role for Silver Linings Playbook.

The second installment of Hunger Games debuted to rave reviews and high box office numbers, and American Hustle, in which she stars alongside Bradley Cooper, has already been nominated for 7 Golden Globes (including Best Motion Picture and a Best Performance by an Actress in a Supporting Role nod for J-Law).

So it was no surprise to anyone that Jen was chosen as one of the most fascinating people of the year.

And the famously outspoken actress used the opportunity to get a few things off her chest in the interview...

Jennifer, who has been called "curvy" by Hollywood standards, declared that she thinks the word "fat" should simply be outlawed.

Jennifer told interviewer Barbara Walters: “I just think it should be illegal to call somebody fat on TV. I get it, and, and I do it too, we all do it.

"[But] the media needs to take responsibility for the effect that it has on our younger generation, on these girls who are watching these television shows, and picking up how to talk and how to be cool.

​"I mean, if we’re regulating cigarettes and sex and cuss words, because of the effect they have on our younger generation, why aren’t we regulating things like calling people fat?”

The girl makes a good point!

Do you agree with Jen that the word "fat" should be banished from TV? Tweet us @sofeminineUK! 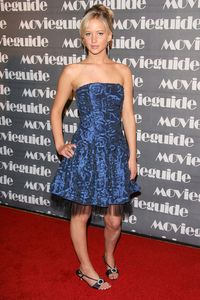