We all know that Justin Bieber has gone from sweet child star to a generally horrible bad boy who takes drugs, wears weird hats and gets in trouble with the law, but we still can’t quite believe he has began to show off that he took his ex-girlfriend Selena Gomez’s viriginity. Seriously, there is a line Justin, and revealing your ex-girlfriend's personal life crosses it. Not cool Biebs.

Justin Bieber is one of the biggest and most annoying stars in the world, so we shouldn’t be surprised that he has allegedly been boasting about taking his ex-girlfriend Selena Gomez’s virginity, but we are. Have you no respect boy?!

According the RadarOnline, the 20-year-old revealed the news “with no embarrassment of shyness whatsoever.” We’re embarrassed for you Justin, why would you tell everyone personal information about your ex? Just why?! 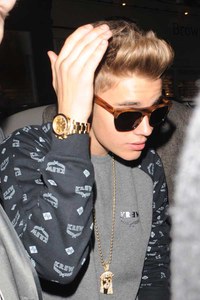 A pal revealed to the site: “It was in the summer of 2011. They flew to Palm Springs for a couple of days and had a super private place to stay. The purpose of the trip was 100 per cent because Selena finally said ‘yes’ to having sex with him.

“They both agreed because they both said they were in love.”

According to the source, Justin Bieber used this as proof that the former Disney star was indeed in love with him.

“Justin told me, ‘I knew she was in love with me when she gave me her virginity.’ He said it with no embarrassment of shyness whatsoever.”

It doesn’t look like the 19-year-old cares too much about who he sleeps with nowadays, as he has been seen spotted coming out of brothels, has been filmed sleeping by a girl he supposedly had sex with, and most recently was snapped biting a girls nipple on a night out. Sigh.

We’re not sure how Selena is going to react when she hears that Justin has been sharing the deets of their personal lives, but we’re guessing she won’t be too happy. This is probably going to be the least of the Biebs concerns recently though, as the boy wonder had been charged with assaulting a limousine driver, and was arrested on suspicion of driving under the influence and resisting arrest in late January.

We’re hoping he gets himself out a trouble soon – we miss the old, hair flipping Biebs!

Do you think Justin’s gone too far? Tweet us @sofeminineUK