Justin Bieber has been urged to go to rehab

We hate to be the ones to say it, but it looks like Justin Bieber has gone down the same path that so many child stars sadly find themselves on – skipping down the yellow brick road to serious trouble. The pop star was at the centre of a police raid this week after apparently pelting a neighbour’s house with eggs, and now friends are urging him to get help for his behavioural problems.

Justin Bieber has been urged to go to rehab and deal with his behavioural issues and drug use.

According to RadarOnline, the 19-year-old pop star heard concern from those closest to him and wants him to get help after 2013 was one long line of one scandal after the other for the singer.

An insider source revealed: “The people who care about Justin and whom are closest to him wish he would consider getting help.” 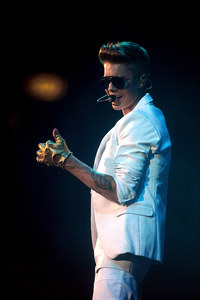 ​We’re not sure he’d go for it to be honest, but bless them for trying! It may be that his antics this week were the final straw, as the L.A. County Sheriff raided the singer’s California mansion on Tuesday to seize security camera footage after a neighbour accused the young star of throwing as many as 20 eggs at both him and his house.

It might seem like a harmless prank to some, but when you’re the most famous man-child in the world, your antics will have consequences. Oh Justin, why can’t you think things through?!

It looks like the company Bieber has been keeping lately is pretty dubious as well, since police have arrested Bieber’s friend Lil Za for drug possession after they apparently found ecstasy and Xanax. We’re not especially surprised by this revelation, since he’s been spotted smoking pot as far as January last year, which he jokily addressed during his appearance on American TV show Saturday Night Live, where he said: “I also heard he got busted for smoking weed and he’s really sorry about it and people make mistakes and he’s never going to do it again.”

This was obviously not the end of it though, as rumours of drug use have been following him around his world tour, particularly in September when Bieber instagrammed a snap of his producer holding a bag of white powder. The producer, Jason Boyd, was also linked to an international cocaine hub.

Then, of course, one of Bieber’s bodyguards was arrested is Australia after being caught out by snifferdogs at an airport, who found marijuana in his luggage.

It can’t be good for the Biebs to be surrounded by potential drug users! Do you think he needs help? Tweet us @sofeminineUK