A new book called Kate: The Future Queen, written by newspaper journalist Katie Nichol, has claimed that the Duchess didn't end up at the same university as Prince William by accident. It alleges that Kate and her mum did all they could to ensure she would marry the country's most eligible male.

A new book has claimed that Kate Middleton did all she could to ensure she would study alongside Prince William at university.

The Duchess of Cambridge - who married Wills in 2011 - reportedly rejected her first choice of university and took a gap year so she would be an undergraduate at the same time as her now husband.

The book Kate: The Future Queen - by newspaper journalist Katie Nichol - alleges that Kate snubbed her place at Edinburgh University and chose St. Andrews instead after it was made public Wills would be attending.

The claims come after it was previously reported that Kate's "pushy" mum Carole Middleton told her to apply to St. Andrews.

And it seems the plan worked - as Kate and Wills got together shortly after they both kicked off their art history courses.

Katie Nichol's book goes on to claim that Carole later confronted Wills about his intentions towards her daughter when he visited their family in 2009.

A family friend claimed William reassured her he would be proposing to Kate - and sure enough the couple got engaged the following November.

Now Kate and Wills, both 31, are parents to baby George, Carole apparently has some new demands.

Another of the Middletons’ friends - former neighbour George Brown - is quoted in the book.

He reportedly said: "It was a condition when Kate and William got married that Carole and Michael would be a part of the grandchildren’s lives."

And she's certainly got her way - Kate returned to work last week and left Carole in charge of George.

Kate made a surprise appearance in Anglesey with Prince William and revealed her mum was looking after the baby.

She told well-wishers: "George has been very good and sleeping well. He’s with granny at the moment."

Kate added: "He’s sleeping well but I know these things change at a minute’s notice."

Carole had travelled to North Wales especially to babysit at the last minute, after Kate decided she felt up to attending the event. 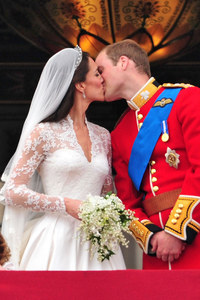