Lately everyone can't stop talking about female popstars and their clothes - or lack thereof. In an interview with NPR, Katy Perry voiced her opinion about female celebrities getting naked, saying "it's nice to play other cards." But the singer doesn't have much room to talk. Should the PVC fan and former flesh-flasher really be telling other stars how to behave?

Katy Perry, who is known for her provocative costumes and questionable lyrics, seems to think her fellow pop princesses need to start covering up.

In an interview with Scott Simon for NPR’s Weekend Edition, the ROAR singer said: “Like females in pop – everybody’s getting naked. I mean, I’ve been naked before but I don’t feel like I have to always get naked to be noticed.”

Katy is a known fan of skintight PVC and glittering body con dresses, so it's no surprise that many think it's a bit rich that she wants others to put it away.

Let's not forget that the 29-year-old also launched her career with the raunchy song “I Kissed a Girl.” And it’s not like modesty is her forte; she has lyrics about threesomes, getting naked and dancing on tables and getting wasted.

Oh yeah, and then there was that time Katy squirted whipped cream out of her boobs in the video for “California Gurls” and was fully nude on a cloud for her album art for Teenage Dream.

Sensibly Katy refuses to name names in her interview, but with celebs like Kim Kardashian, Miley Cyrus and Kesha bearing it all, it’s not hard to fill in the blanks.

​But a large portion of Perry’s career is based on her sexuality, and for her to play it off as something she sometimes takes advantage of is misleading.

Just claiming she’s not being judgmental doesn’t mean she’s not participating in a form of slut-shaming – making other celebrities feel guilty for their sexual behaviours or decisions. But on the other hand have things gone a bit too far recently?

We wonder what her barely dressed bessie, Rihanna has to say about Katy's comments? Especially after her x-rated bikini shoot. 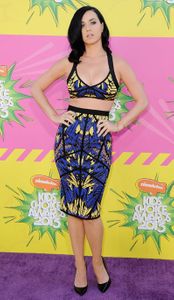 What do you think about celebs showing skin? Is it just a good way to get publicity or do you agree with Katy Perry that stars need to tone it down? Tweet us @SofeminineUK.