It has been revealed that Kanye West popped the question to Kim Kardashian on her 33rd birthday last night, and the new mum accepted his marriage proposal! The ultimate birthday surprise took place at the AT&T park in San Francisco with the whole Kardashian family also in attendance. We're so happy for you Kimye!

E! News has reported that Kim Kardashian and Kanye West got engaged last night at the AT&T Park in San Francisco.

Kanye went about it in the traditional way, asking Kim’s mother Kris Jenner’s permission before getting down on one knee.

Kanye allegedly popped the question with a flawless 15-carat Lorraine Schwartz rock that Kim has already been seen delightedly flashing.

On The Kris Jenner show, Kanye recently opened up about Kim in a rare interview where for once he talked more about his romantic side, and less about his personal creative ingenuity, saying:

“And she’s worth it to me. She’s my joy, and she brought my new joy into the world.”

Kayne also opened up about his grief at his mother’s passing in 2007, and how Kim and baby Nori have given him something to live for.

"After I lost my mother there was times I felt like I would put my life at risk. I felt like sometimes I didn't have something to live for, and now I have two really special people to live for," the Stronger rapper said.

Despite their obviously happy relationship and their daughter, Kim did mention the unlikelihood of them getting engaged any time soon back in January on the Today show, stating:

"[Marriage is] something that we talk about, but I think it's just right now [we're] focusing on the baby.

"What I've learned in life is - I was always such a planner, and...you think your life is going to be a certain way, and the best surprises just happen when you don't plan."

Obviously Kanye had a different idea in mind, and it looks like Kim doesn’t mind at all!

Are you pleased for the happy couple? Tweet us @SofeminineUK 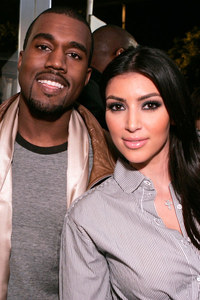 Emmy Griffiths
…
Wedding
For all the best videos, memes and shareable news!