Uh oh! We wondered when Kris Jenner – well known monster momager – would cross the line, and we think this might just be the moment! Apparently the head of the Kardashian clan has placed a £50 million gagging order on her own family to stop the gang revealing any secrets she doesn’t want revealed, confirming once and for all that the Kardashians seen to be more of a business than a family!

Kris Jenner is quite the controlling manager of the Kardashian clan, and now it looks like she has taken ordering her family around one step too far as Now magazine claims that the matriarch has placed a £50 million gagging order on the entire family.

Apparently under the terms of the order Kris’s daughter, Kim and her fiancé Kanye West are obliged to disclose any business or legal dealings so she would know everything about their prenup. 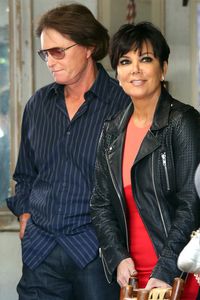 Similarly, Kim’s older sister Khloe Kardashian has also received the document along with her estranged hubby Lamar Odom, who will have to tell Kris the legal action he’s taking during their divorce.

An insider claimed: “Kris wants to be the one who controls what people think about her and her family. However, the more famous she’s become, the less control she has. This contract agreement shows just how controlling she is about any private information that could be leaked.

“Even though she knows her immediate family would never spill any secrets, she’s still given it to all of them and her closest friends. Kris is especially nervous about any details of her marriage break-up from Bruce Jenner being revealed. She doesn’t want stories to come out.”

Ah trust. Such a fragile thing, and apparently Kris isn’t taking any chances! Apparently the two-age contract is full of clauses, including a £3 million fine for anyone who breaches the order and £700,000 fines each time any breaks any other regulations of the contract.

Why would the girls sign this?! Apparently the order has also been given to the entire cast and crew of Keeping Up With The Kardashians.

“There’s a feeling that it’s pretty extreme,” a source claimed, “but everyone’s going along with it. It’s just another thing the family have to get through.”

Do you think Kris is taking it a little too far? Tweet us @sofeminineUK