Kristen Stewart apparently doesn’t understand what the end of a relationship is. It sounds like she is upset that Robert Pattinson didn’t visit her in LA over the holidays, although he visited the US to spend New Years Eve in New York City. Instead, he opted to go straight back to London, and his ex-girlfriend is allegedly very disappointed that he didn't take the time to see her.

Kristen Stewart has a right to be annoyed at Robert Pattinson. She cheated on him over a year ago now with her director at the time, Rupert Saunders, ending both her relationship and Rupert’s marriage.

They sold their shared house, and Rob looks like he could possibly have been moving on after being seen with model Dylan Penn and pal Nettie Wakefield.

​So it seems perfectly reasonable that Kristen should be annoyed that RPatz didn’t bother to visit her in LA after spending New Year’s Eve in New York City. 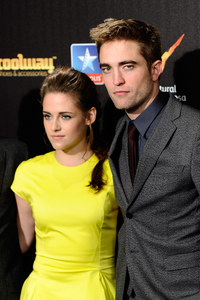 Admittedly the two have been seen out and about together recently, and it sounds like the 23-year-old was hoping to see more of Robert before he went abroad to shoot his new film, Queen of the Desert.

A source told Hollywoodlife.com: “Kristen was looking forward to seeing Rob before he left for Morocco. There was talk of him possibly coming to LA after his New York trip, but he decided to spend the remainder of his time before filming with his family in London.

“Of course Kristen was disappointed with his decision, but she’s been nothing but supportive and understanding. She realises how important his family is to him.”

He seems to be having a good old time in London as well, as he was seen having dinner with his sister and some friends as a restaurant earlier this week, and the restaurant staff happily posted online: “Guess who came to dinner this evening!!! The lovely Robert Pattinson and friends.”

However, apparently the two of them have been keeping in touch as the source continued: “they have been staying in touch, sometimes they Skype or text each other. They are both going to be really busy soon. Kristen prefers it when she’s busy working, and she’s excited to go to Sundance. She’s super proud of Camp X-Ray.”

So are these two together again, or not? They haven’t been seen together since November, despite rumours that the two were due to be spending Thanksgiving and Christmas together.

Do you think Kristen is fighting a losing battle trying to restart her relationship with RPatz? Tweet us @sofeminineUK