Lady Gaga goes on Twitter rant to address her haters

Lady Gaga has taken to Twitter to set the haters straight. The pop-star - whose new single Do What U Want was released at midnight - responded to the critics via social media in a long exasperated rant on Sunday night. Here's what she had to say - about pretty much everything...

With crazy fame like Lady Gaga’s comes insults and backlash. There have been a slew of unflattering things said about the 27-year-old blonde bombshell, and the pop-star decided to tweet her 40 million followers to let them know that she’s unaffected by her critics.

In an effort to promote her latest single, “Do What U Want,” which features R. Kelly, Gaga posted a series of tweets directly addressing her haters’ comments.

Each of her tweets was followed by the hashtag, “DoWhatUWantWithMyBody,” or “WriteWhatUWant,” going along with the theme of her song.

Her tweets addressed the Madonna controversy, in which the pop-star was accused of copying the icon’s style, reports over her alleged drug abuse and the rumor that she is a hermaphrodite.

She also wrote about her recent chart feud with Katy Perry, whose single “Roar” released the same day as Gaga’s song “Applause.”

LADY GAGA IS ON DRUGS! HER CAREER IS OVER! (been an addict for 10years) #WriteWhatUWant My recovery is a daily battle pic.twitter.com/EXHxuDcT1b

APPLAUSE didn't DEBUT AT #1! KATY IS BETTER THAN HER! #UWontUseMyMind I write for the music not the charts pic.twitter.com/KjOpFURWwl

LADY GAGA IS A HERMAPHRODITE! LOOK AT THIS PIC OF HER D*CK #DoWhatUWantWithMyBody pic.twitter.com/nOCYrRtJSb

In the tweet, fans are directed to a 2012 interview with Cynthia McFadden where Madonna said her work was “reductive” and “I don’t need anybody’s permission to be remembered. I will be. Whether they like it or not.”

And the tweets just kept on coming. In terms of generating excitement and buzz about her new music Lady Gaga certainly did that.

The girl sure knows how to get some Twitter publicity as her recent tweets have had well over 100,000 retweets.

MADONNA HATES GAGA SHES OVER http://t.co/zrxU9k3Ho2 i dont need anybodys permission to be remembered. I will be. Whether they like it or not

Gaga also revealed the cover art for “Do What U Want,” the seventh track from her latest album ARTPOP, late Friday night.

In the picture, the singer is seen facing away from the camera, wearing a blue, pink and black thong.

Her promotional art for the song also included a picture with moss covering her naked body - well with Gaga we'd expect nothing less.

OFFICIAL DO WHAT U WANT FEAT @RKelly COVER ART. Song Available this Monday 12:01am! pic.twitter.com/L2evORgE2T

It certainly seems like she's trying to put her view across to the critics and the message coming through loud and clear is that she really doesn't care.

What do you think about Lady Gaga's tweets? Are you a fan of the outlandish singer? Tweet us and tell us your thoughts @SofeminineUK.

Check out some of Gaga's greatest looks: 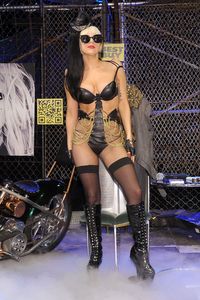 by the editorial team
+
All the news about Lady Gaga

Cary Carr
…
From hair ideas to outifts, look no further for your daily inspiration