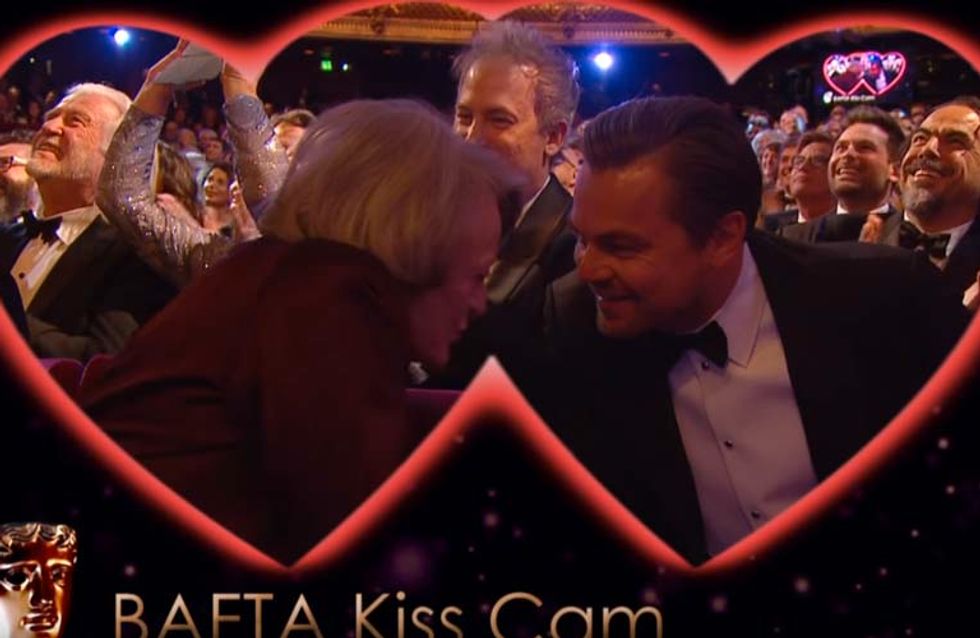 If you missed the BAFTAs last night, let us tell you that it was a good old heaping of British fun. Stephen Fry presented and made an array of spectacular quips, Sidney Poitier received the outstanding lifetime achievement and gave a mesmerising speech, Kate Winslet did her usual heavy breathing 'I can't believe I won!' speech. But our favourite moment of the night had to be the Kiss Cam, especially when it was pointed towards Dame Maggie Smith and Leonardo DiCaprio.

Stephen Fry introduced the bright idea to point a kissing cam at the typically awkward British audience and guess what? The best and brightest of cinema actually just rolled with it! Firstly Cuba Gooding Jr and Stanley Tucci had a moment, kissing each other delicately on the forehead which was all very nice and we enjoyed. But then the magic happened.

The camera pointed at Maggie Smith and Leonardo DiCaprio, and while she laughs you see a twinkle in Leo's eye as he leans over and plants one on her cheek. She turns around to chatter with him and he grins at her, and we realise that Maggie must have fallen in love and we truly understood once and for all why Leo once played Romeo. As Stephen says, it was "a marriage made in heavem."

After that moment, the kissing cam started to get pretty darn raunchy as Julianne Moore and Bryan Cranston 'made out', and Rebel Wilson and Eddie Izzard actually made out. We have to say, we sort of love that no two British actors were ever paired together. Clearly we need the Americans or Australians to initiate any kind of physical contact.

Check out the fabulous Kiss Cam at the BAFTAs for yourself...