It seems like there has to be at least one member of the Made In Chelsea cast with musical aspirations - this time it's Andy Jordan. We've got to say we could have done without yet another posh singer/songwriter but let's give him the benefit of the doubt...

Andy Jordan appears to be the latest member of the Made In Chelsea cast with hopes of launching a music career.

The dark-haired posho was at London's Wireless festival this weekend and spoke about his aspirations to break into the industry himself.

He told Heat magazine: "Music's always been a bit of a bedroom hobby for me, and I've never actually had the balls to step out and do it, but I'm kind of getting there. So sometime soon there will be some music from me."

Naming Justin Timberlake as his idol, is that the style of tune we could hope to hear from Louise Thompson's boyfriend?

He explained: "I try to focus on being quite acoustic; quite raw. Because it's quite a hard thing to do with everyone going, 'Oh look - there's a Reality star tackling a music career'.

"So I'm just trying to stick to being quite low-key; quite live."

Hmm, yeah - we remember Caggie Dunlop and Gabriella Ellis' very "live" offerings...as much as we'd like to forget.

While Andy's been plotting his next career move, fellow cast mate Jamie Laing has been enjoying time off from the camera crews by getting well and truly drunk in St. Tropez.

The 24-year-old reality star was spotted play fighting, doing headstands, eating a kebab and falling in a bush!

Jamie is taking in the French sunshine with some friends (who don't appear on the show) and his girlfriend Tara.​

The following day he made reference to his nasty hangover on Twitter: "I'm not feeling well and I'm in St Tropez. Not a good combo. Can someone please come help me."

Oh the lives of the Made In Chelsea gang!

So do you want to hear Andy Jordan's tunes? Tweet us @sofeminineUK 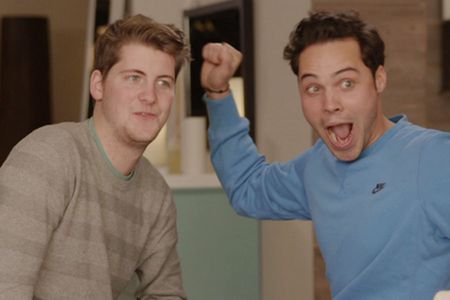