Brit pop-rock band Mcfly were once known for their success with the ladies - they even penned a book all about their many, many conquests. But now, with two of the four members married, Danny Jones has become the third to pop the question.

McFly singer Danny Jones has put his wild, womanising ways behind him and proposed to his girlfriend.

Danny, 27, and his other half Georgia Horsley announced their engagement on Twitter last night.

They both posted a pic of themselves looking thrilled, with The former Miss England holding up her hand to show us the ring.

Danny will be the third member of the band to settle down and get hitched.

The first was band Tom Fletcher, who married his long-term love Giovanna Falcone back in May 2012.

Giovanna's brother - TOWIE's Mario - also got in on the action, congratulating the happy couple on their news.

Shortly after Tom's wedding - best known for the moment he serenaded his wife, Justin Timberlake style - it was Harry Judd's turn.

Drummer Harry walked down the aisle with musician Izzy Johnston.

Other congrats for the newly engaged member of the band have been coming in.

The happy couple first started dating back in 2009 after Danny split with a different former Miss England, Laura Coleman.

Georgia, 26, who now works as a model, may be surprised by the timing of the proposal after Danny predicted it would be another year before this was likely to happen.

He told the Daily Mirror last year: "It’s serious. But I don’t think I’m quite at the putting-a-ring-on-her finger stage. Maybe in a couple of years.

"Girls still ask me out and I’m like 'No, I’ve got a girlfriend'. I’ve done my bit for the boys and it was great while it lasted, but I’m well and truly over that now."

Congratulations to the happy couple! 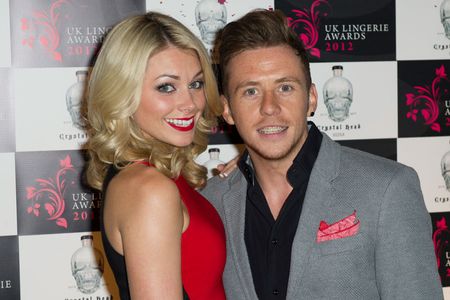