Before her new single was released, we'd almost forgotten why Miley Cyrus was famous. But she promised us we'd soon all be talking about her - and she was right. The pint-sized singer shocked audiences around the world with her risqué performance at the MTV Video Music Awards this weekend - and she's far from sorry.

After lighting up the Twittersphere and causing quite the stir in the Brooklyn Barclays Center, Miley was spotted the next day at the studio in New York.

The singer, who was there to record the video for her next single, arrived in a comparatively demure outfit - a hoody and teeny tiny hot pants.

But this didn't last long - Miley, 20, then tweeted photographs of herself, posing in her new signature style.

The first of the snaps showed the miniature star crouched in her new favourite twerking position - also sporting hot pants and a matching crop top.

In the next snap, Miley was in a boys' locker room wearing just a red bra with white lycra hot pants and a strange black thong over the top. 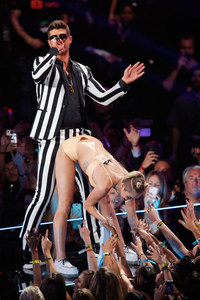 With her leg up on a ledge, it doesn't seem like Miley's planning on reviving her role as Hannah Montana anytime soon.

She captioned the snap: "#23 #youcanthangwithus #boyslockerroom."

They say no press is bad press - if that's the case Miley must be laughing as she boasted about the record number of tweets her performance received.

She posted to the site: "Smilers! My VMA performance had 306,000 tweets per minute. That's more than the blackout or Superbowl! #fact."

She also posted quotes from Rolling Stone: "'Miley was the one star in the room who truly understood what the MTV Video Music Awards are all about!' - Rolling Stone."

She later wrote: "'Miley stole the night, which is why the nation is still in recovery today. Thanks, Miley...' - Rolling Stone."

After a whole host of celeb reactions - most of which were far from positive - Miley remained mostly quiet with a friend piping up to come to her defence.

She went on: "@DominicScott the reasons Kelly Clarkson is bitter could really go on for day..."

America's Got Talent host Nick Cannon tweeted: "Remind me to never let my kids into showbiz... thanks."

Snap shots of various celebs in the crowd also gave an impression of just how most people felt about Miley’s performance.

Will Smith’s family looked shocked to the point of disgust. 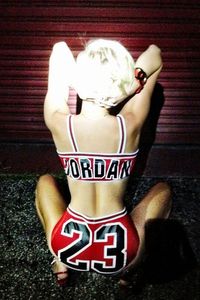