They were a mismatch made in heaven – she a wealthy Chelsea heiress and he a tattooed rapper from Hackney, and yet the differences of their lifestyles were ignored as the loved up pair got hitched in September last year. However, it looks like the marriage is already in trouble as pals of the couple are worried that they rushed into marriage too quickly.

Professor Green (real name Stephen Manderson) and Made in Chelsea’s Millie Mackintosh were married only four months ago, but it sounds like their marriage is already in trouble.

Not only has Millie changed her name on Twitter back to Mackintosh, which has led us to deduce that the shine has worn off being Mrs Manderson, but close friends of the pair are apparently concerned about how quickly they got hitched.

A source revealed to Heat magazine: “It’s like the magic has already worn off. Without all the fun, red carpets and a wedding to plan, it’s like they’re facing facts: marriage is HARD. They really love each other and that hasn’t gone away – but it’s not so much of a fairy tale any more.” 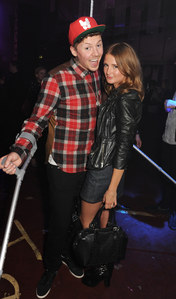 Well, you know what they say, the first year is always the hardest. You can get over the hump guys!

However, the pair that were once seen to hardly leave each other’s side have barely been seen together in recent months, and the 24-year-old Millie has began an intense diet routine which has seen her go to a size 6.

Millie and the Prof have lasted the test of time so far since the two of them met in 2011 after the 30-year-old asked FHM for the Chelsea girl’s number after spotting her on the cover of the magazine.

​The pair were engaged in March 2013 and married in a sweet ceremony in September. Although being the hot new celebrity married couple must have been fantastic, unfortunately it can’t last forever, which is what is allegedly causing the problem.

The insider continued: “After they got married, they got caught up with the idea of being this celebrity couple. They were partying a lot, sometimes four times a week and with the drinking and hangovers, arguments are bound to happen.”

Professor Green’s run in with the law in November hasn’t helped the situation either. After officers were called to their home after Pro insisted that his Rolex had been stolen, the police discovered his Mercedes had been in a crash and arrested him for drink driving instead.

Rumour has it that Millie was furious with the incident, as it made her new hubby look bad in front of her fabulous friends and family.

The insider revealed: “Millie was furious [over the arrest]. She doesn’t want her friends and family to think Stephen is trouble. She keeps asking him how he could be so stupid. They’re also at loggerheads about his drinking and partying.”

Do you think the Greens will be parting ways soon? Tweet us @sofeminineUK

Made In Chelsea's Millie Mackintosh models for Very.co.uk

by the editorial team
+
All the news about Millie Mackintosh