Miranda Kerr is recovering at home after she was involved in a car crash.

The gorgeous Victoria's Secret model - whose husband Orlando Bloom, 36, is looking after her - has to wear a neck brace following the scary road collision. 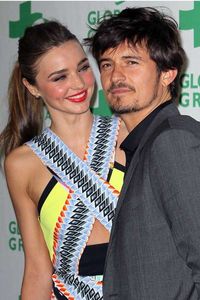 The 29-year-old was injured when a car ploughed into her vehicle on a road in Los Angeles on Monday.

Miranda was quickly treated by medics and even underwent an MRI scan - she was given a neck brace as a precaution, but fortunately her injuries are not thought to be serious.

The driver of the other car has been arrested.

Miranda tweeted last night: "Thanks for all the messages of support, I'm on the mend!"

The mum-of-one was travelling with her assistant when the accident occurred - her two-year-old son Flynn was not with her.

Miranda's spokeswoman said: "She is in a lot of pain but, really, we are just glad it was not more serious."

She added: "Orlando's taking very good care of her. He’s an amazing husband. Luckily, Flynn wasn’t in the car."

The crash could've brought back painful memories for Miranda, whose long-term boyfriend Christopher Middlebrook died in a car accident when they were teenagers.

Miranda has previously revealed that baby Flynn's middle name is Christopher, which was chosen in tribute to her tragic ex.

She told Australia's Daily Telegraph: "After he died, I wrote him a letter that said I hoped to name my first child after him in some way.

"I told Orlando and he was the one who said he'd be happy to do that."

Miranda - who's still in touch with her ex's family - recalled the heartache she experienced at the time of Christopher's death in her book, Treasure Yourself.

She wrote: "We had been dating for two years, and I had just left Gunnedah [a remote town in New South Wales, Australia] and moved to Brisbane when he was killed instantly in a car accident and all of a sudden it felt as though my world had fallen apart.

"Although we were only young, we had both talked about spending the rest of our lives together. I felt as if my heart had been ripped from my chest and I didn’t know what to do.

"Chris’ death taught me that the people who touch your life are always with you.

"It taught me that I have the choice to be grateful for the time I had with him instead of dwelling on losing him."

How Miranda Kerr Made Sneakers Look Sexier Than Ever

by the editorial team
+
All the news about Miranda Kerr