What? Wait, WHAT?! Niall Horan has been hanging out in London with his band mate’s ex-girlfriend, superstar Taylor Swift. Apparently the 20-year-old hung out with the singer before watching one of her gigs. Uh oh Niall. Never heard of the bro code?! Harry Styles is currently enjoying his 20th birthday celebrations in California, so we suppose when the cat’s away the mice will play!

Niall Horan might be getting himself into hot water with his band mate Harry Styles as he has been seen hanging out with Harry’s ex-girlfriend, Taylor Swift.

The 20-year-old Irishman has been recovering from major knee surgery, and hobbled down to Taylor’s gig at the 02 Arena on crutches. 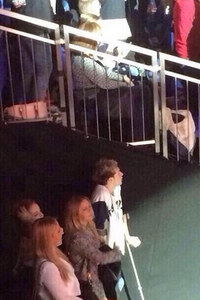 We’re not sure why he is supporting the singer as since Harry and Taylor broke up way back in January 2013, Taylor has been less-than-subtle with her jibes at her ex-boyfriend, including making a dig at him during her MTV Video Music Award acceptance speech, putting on a British accent for the ‘ex-boyfriend’ during her performance, and mouthing for him to “shut the f*** up” during a One Direction acceptance speech, which was caught on camera.

The boys have spoken about Taylor’s antics, with Liam Payne stating he thought: “it was a bit not needed” and Louis Tomlinson joking: “We were a bit confused. We thought she was actually calling out Niall, so the whole thing’s a bit confusing.”

Apparently Niall doesn’t mind Taylor’s swipes at his friend though, as he obviously wanted to support the singer. An insider source told The Mirror: “Taylor was happy to sort Niall some Access All Areas passes and even had drinks with him before the show.

“They met through mutual friend Ed Sheeran. Niall seemed like a genuine fan of Taylor’s msic. However, he smirked when she performed I Knew You Were Trouble which was rumoured to be about Harry.”

Niall’s mysterious new friendship with Taylor comes at the heels of reports that his two-month relationship with Victoria’s Secret model Barbara Palvin has cooled off after she moved to Paris to focus on her modelling career.

Niall didn’t mention the gig at all on Twitter - presumably because he knew people would go crazy - but that didn’t stop eagle-eyed fans from sharing snaps of him enjoying Taylor’s Red tour.

Do you think the pair are just friends, or is there some sloppy seconds going on?! Tweet us @sofeminineUK