Niall Horan took his fans on a roller coaster of emotions last night. First they were thrilled - he was finally doing a live stream on his webcam. But then they were left despairing as they saw him embrace a mystery brunette at his house...and they seem to think they know who it was.

Twitter was full of both joy and sorrow from Niall Horan's legion of fans yesterday.

The Irish heartthrob delighted his followers with a live stream of himself at home.

The boys are back in the UK now following their final performance on the US leg of their tour.

But all was not to Directioners' tastes when Niall finished up the video by getting up to greet a mystery girl at his door.

After fifteen minutes of not so interesting chat, the 20-year-old had to end the stream as his doorbell rang.

As he said his goodbyes, the singer thanked fans for both their support during the tour and the Teen Choice Awards 1D won on Sunday night.

He went on to encourage everyone to go and see This Is Us - their fly on the wall documentary film - and even told people he'd got a new mattress - before going to greet his visitor.

It's gripping stuff - if you want to see the blond hottie in all his jet-lagged glory watch the full clip. (Skip to the end for the unidentified lady).

Although there was no official confirmation of who the girl was, fans were quick to say it was Amy Green.

Amy was linked to Niall in late 2012 and a source told The Mirror: “Niall couldn’t wait to see Amy. She has a normal life and doesn’t pay much attention to any fuss. He likes that.

“Everyone speculates about his love life, but he’s near the point where he doesn’t care. Amy and him are great together.”

And it seems they are still very close a year later.

So why was everyone so convinced? Besides her long brown locks, Niall also greeted her with a big hug and shouted "Greenie".

The hug got him trending on Twitter and fuelled a host of sad posts from fans.

Apparently unaware of just why the site had gone mad over him, he wrote: "Whats all the drama about?” 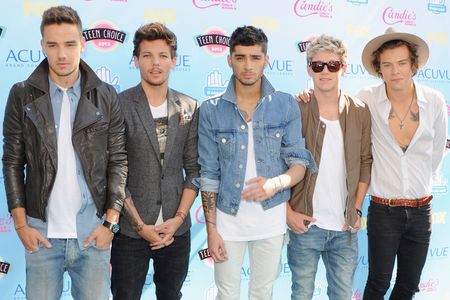 Francesca Menato
…
#hook-up#One Direction
From hair ideas to outifts, look no further for your daily inspiration