Peter Andre finally responded to rumours last week when he revealed that he and his girlfriend Emily MacDonagh are expecting their first child. Ever the traditionalist, Pete is reportedly hoping to make her his wife pretty soon too.

Peter Andre is said to be planning to marry his pregnant girlfriend Emily MacDonagh.

The couple announced on Monday that they're starting a family together after weeks of rumours that the 23-year-old was carrying her first child.

Now it seems it's not just a baby on the cards, but a wedding as well.

A close friend explained to Now magazine: "He's delighted about the baby.

"Pete's traditional and Emily makes him so happy. He's 100 per cent planning to get married to her.

"He really respects her and wants her to be as happy as he is."

But it seems they'll have to wait until their child is born before they become husband and wife.

The friend continued: "They'll concentrate on the baby first but a wedding will absolutely follow.

"There's not date yet but we'd expect it to be next year. It'd most likely be after she's had the baby and got used to life as a mum."

When asked directly, Pete remained very coy on the subject of tying the knot.

On his new Peter Andre channel a fan asked whether he about to pop the question.

He shyly dodged the question with the answer: "I don't know. I haven't even...wow! Good question, no answer."

The 40-year-old had reportedly given up hope of ever being happily married again, following his bitter divorce from Katie Price in 2009.

But sources describe Pete's current relationship as totally different to the one he had with his ex-wife.

They said: "Emily and Pete have a real, loving romance. When they get married it'll be a low-key affair.

"Their love is nothing like his relationship with Katie - everything was in the limelight back then." 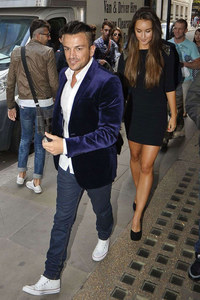