Peter Andre speaks out about his wedding plans with Emily MacDonagh

With the news that Peter Andre's girlfriend Emily MacDonagh is pregnant, many thought the couple were all set to walk down the aisle. But the singer and reality star has addressed these rumours and has insisted no-one knows the truth...

Peter Andre has denied he is planning to marry pregnant girlfriend Emily MacDonagh.

It was reported last week that Pete was preparing to propose to the 23-year-old with a magnificent diamond - but he's insisted this isn't the case.

Pete wrote in his new! magazine column: "A couple of magazines published stories last week saying I am planning to propose to Emily and have already been ring shopping.

He added: "All I will say is that the stories are completely untrue and made up. People are just writing what they want.

"I have never discussed anything like that with anyone."

Could Pete simply be trying to put us off the scent?

It's no surprise that Pete is keen to keep his relationship to himself after his disastrous four-year marriage to Katie Price.

Pete and Katie, who have two children together, have engaged in numerous public spats since their split in 2009.

But it seems the former glamour girl is keen to make amends after she tweeted her congratulations to her ex after it was revealed he was to be a father again.

Rumours began circulating that the pair could be pregnant last month, when Pete, 40, was snapped with his hand on Emily's stomach.

Emily, who's been dating Pete for around a year, has just qualified as a doctor and won't be giving up her career to be a mum.

Pete told new! magazine last month: "We were going to keep this to ourselves a little bit longer, but as everyone’s been asking I am very happy to tell you that Emily and I are having a baby, and we are over the moon.

"Emily will make a brilliant mum."

A spokeswoman for Pete and Emily added to MailOnline: "They are over the moon.

"Emily had a check-up last week and all went well, so they’re thrilled to bits. They’re completely smitten." 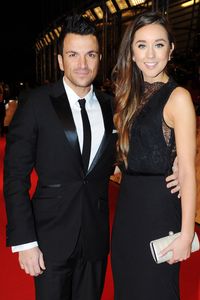