And the royal baby news continues! The new arrival has been meeting his family at Kensington Palace and is now headed to Kate Middleton's parents' house with his mum and dad. Prince Harry has already had a cuddle and has no doubt fallen in love with the adorable boy, just like the rest of the world...

Wills' younger brother paid a visit to his nephew at Kensington Palace this afternoon.

It was a busy morning for the as yet unnamed little boy, as just hours earlier the Queen - the baby's great grandmother - travelled from Buckingham Palace to meet him.

She arrived in a green Bentley and spent just over half an hour with the new arrival.

The 87-year-old has said she is "thrilled" with Will and Kate's happy news.

Though Baby Cambridge overtakes Harry as third in line to the throne, the ginger Prince was thrilled when he found out his brother was going to be a dad.

Wills and Kate left the hospital the next day and headed to Kensington Palace, but are now thought to be on their way to Kate's parents in Bucklebury.

Harry was obviously keen to meet the new addition - and we love the thought of him giving the little one a cuddle!

But could the 28-year-old Prince be feeling broody after seeing his brother in new-daddy bliss?

Harry is currently dating 24-year-old society girl Cressida Bonas - though their relationship seems to be on one minute and off the next.

Back in April, Cressida was said to be scared of Harry's desire to settle down.

Harry is apparently keen to follow in his brother's footsteps and get married - and of course babies come next!

Earlier this year, during his time in Afghanistan, Harry spoke about the difficulties of finding love and settling down when you're a Royal.

He told the BBC: "If you find the right person and everything feels right, then it takes time, especially for myself and my brother."

Harry added: "You aren't ever going to find someone who's going to jump into the position that it would hold, simple as that."

Nonetheless, insiders have told Grazia that Cressida was "born to be a Princess".

Only time will tell...

Check out the pictures from the royal baby's public debut...​ 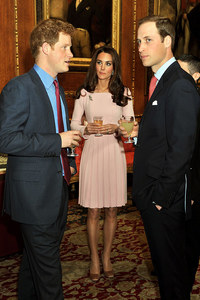