Prince Harry and Cressida Bonas have been rumoured to be heading for splitsville for months. However, that didn't stop the ginger prince from making sure Rolling Stones musician Ronnie Wood kept his distance. The pair ran into the rock legend at Glastonbury and Harry wasn't taking any chances.

The royal couple were taking in the music and culture of Glastonbury Festival and popped backstage to see the rock royalty.

It was when Cress shared a quick squeeze with 66-year-old Ronnie Wood, that Hazza stepped in to tell him to steer clear.

Speaking of their meeting, Ronnie told 3am: “Prince Harry was watching the side of stage and he introduced me to his girlfriend, I gave her a cuddle and he said ‘Oi, get your hands off my bird’.

"But it was great to see him again.”

The royal pair then continued their fun, partying until 4am with Cressida's pals.

The story comes off the back of a less flattering tale of Prince Harry's bad boyfriend behaviour.

The 28-year-old prince reportedly neglected his girlfriend and danced with his ex Chelsy Davy at the society wedding they all attended a few weeks ago.

Harry has always maintained contact with his former flame and at the wedding he even danced with her to The Only Girl In The World, by Rihanna - what they refer to as "their song".

Unsurprisingly, his 24-year-old girlfriend wasn't impressed by the display.

A source for Now magazine said: "Cressie's basically had enough. She knows Harry still carries a torch for Chelsy - he never wanted to end that relationship and has said they'll always be close."

In the build-up to the wedding she was worried about the whole thing and has always felt the "ghost of Chelsy" in their relationship.

Maybe Harry needs to look at his own behaviour before he goes around warning people off his girlfriend! 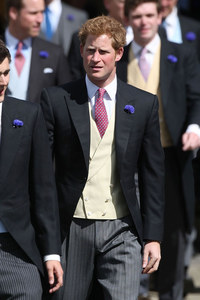 Do Prince Harry and Cressida Bonas make a good couple? Tweet us @sofeminineuk and let us know what you think!

Is Chelsy Davy the reason behind Prince Harry's split from Cressida Bonas?

by the editorial team
+
All the news about Chelsy Davy