Taylor Swift seems to have loads of celebrity friends, but one unexpected BFF is Prince William and Kate Middleton. The pair have asked the seven-time Grammy winner if she will come to their home to headline the Winter White Gala, a fundraising event to benefit the homeless charity Centrepoint, of which Wills is patron. Not only that but the Duke and Duchess of Cambridge have also put in a call to James Blunt and Jon Bon Jovi to ask them to perform at the sold-out black tie event.

Kate Middleton and Prince William are a charitable pair, and they always seem to be campaigning and fundraising for their respective charities.

At the gala 200 guests (including young people from Centrepoint) will enjoy these musical performances in addition to an exceptional buffet, speeches and awards, as well an auction hosted by a celebrity guest.

Prince William has been Centrepoint's patron since 2005, so his generosity in hosting the event at Kensington Palace - where he lives with Kate and baby George - is no surprise given his obvious dedication to the cause.

It's no surprise that Taylor Swift is headlining the celebrations. The singer-songwriter has a long history of using her vocal talents for the greater good.

​In 2011 she performed a benefit concert for victims of recent tornadoes in the United States southeast region and raised more than £47,000.

And if Taylor Swift wasn't enough to get excited about they've also got rock god Jon Bon Jovi on the VIP guest list.

The American star will be honoured with the Centrepoint Great Britain Youth Inspiration Award. The rocker is the founder of the Jon Bon Jovi Soul Foundation, which aids individuals and families in economic despair. We think it's great to see stars who use their success for the greater good.

The event is set to have a private reception and a formal sit down dinner, after which guests will make their way to a Doctor Zhivago themed marquee for the concert at the Palace.

The Royals won't be the only British stars in attendance either - singer Eliza Doolittle and dance troupe Flawless who won Britain's Got Talent in 2009 will also be performing. Sounds like it's gonna be a night of fun and all in the name of charity!

Can we come too please?​

Who is your favourite do-gooder celeb? Tweet us @SofeminineUK! 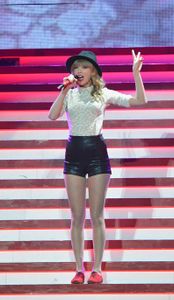