Kate Middleton wowed everyone with her post-baby bod when she appeared for the first time since baby George was born five weeks ago. The new mum looked fresh and happy as she accompanied Prince William to an event in Anglesey. It was earlier than expected for Kate to make an appearance and she looked amazing! Nonetheless, we hope the Duchess doesn't feel under pressure to lose weight as a few post-baby pounds never did anyone any harm!

Kate Middleton has already shrunk down to almost the same size as her pre-pregnancy body.

With such a slight frame during pregnancy, it's no surprise that Kate's sprung back to such a slim figure.

Celebrity fitness expert Nicki Waterman has estimated that she has gone from a pre baby size of a 6-8 to a post-baby size of a 10.

So how has the Duchess of Cambridge managed it?

Nicki spoke to Now magazine about how sporty Kate looks so slim.

It seems a lot of it is to do with the work you put in before and during the pregnancy as much as after.

Kate has always been an active person and maintained this while she was carrying George.

She did a combination of pre-natal yoga and frequently went for walks around her home in Bucklebury - something she has continued since the birth.

Nicki explained: "She can't do much exercise so soon after the birth but she'll have gone back to eating healthily and being active as a hands-on mum."

Sadly for anyone who battles with baby weight, a lot of Kate's success appears to be down to her metabolism.

Nicki added: "Kate has a quick metabolism too because she's an exercise fan.

"But the real secret is she didn't put on much weight in the pregnancy in the first place."

Some women out there may be struggling with the pressure of shifting the pounds after having a baby, but Nicki is adamant that mothers should not push themselves too quickly after they've given birth.

She explained: "It's important that women lose weight slowly and stay healthy, especially if they're breastfeeding as they need more calories."

Hear, hear! There's absolutely nothing wrong with taking it slow and steady and embracing your post-baby curves - just like Fearne Cotton! 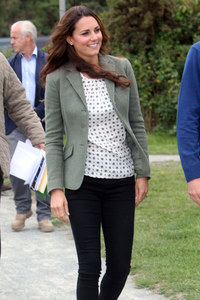