Kylie Jenner took part in the annual Kardashian Christmas card shoot and the 16-year-old reality star looked gorgeous as usual. But some of the images have gotten folks in a bit of tizz, as many are saying that the teen is far too young to be wearing such risqué clothes and posing in such a sexual manner. Especially after the Instagram image was flooded with comments asking when the teen would be ‘legal.’

The Kardashian clan – sisters Kim, Khloe, Kylie and Kendall, as well as mum Kris Jenner – gathered together to shoot the 2013 Kardashian Christmas card.

It’s become an annual tradition for the first family of reality TV and this time they decided to pose on a beautiful beach in Malibu.

Clearly excited with her vast array of outfits, Kylie uploaded to Instagram a snap of herself in a fairly revealing high-cut white mini-skirt dress with a front cut-out panel that displayed a large section of her cleavage.

Leaning back on the railing and staring sultrily at the camera, many have complained that the 16-year-old schoolgirl is far too young to be flashing so much flesh.

The image has racked up nearly 600,000 likes and a whole host of comments – either from men complimenting her look or from concerned fans telling the reality TV star to put it away.

Disturbingly, a number of men have also commented to ask when Kylie will be of legal age.

Meanwhile everyone seems to be praising images of an increasingly slim-looking Kim, who looked drop-dead gorgeous in a revealing black dress during the Christmas shoot.

Since giving birth in June, Kim’s been keen to flaunt her post-baby curves, which she manages to do in the tight bandage-style black gown with a thigh-high split.

It’s not known where the eldest Kardashian sister Kourtney was, or whether the men of the family – dad Bruce Jenner, Rob Kardashian, Brody and Brandon Jenner – would also be taking part in the Christmas shoot.

Not to mention Kourtney’s partner Scott Disick, their two children Mason and Penelope, as well as Kim’s fiancé rapper Kanye West, who were also notably absent.

Perhaps their Christmas card shoot is going to turn into more of a Christmas album?! 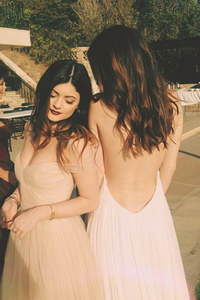 by the editorial team
+
All the news about Jaden Smith