Whether it was playing a wild man trapped in a board game, a hyperactive blue genie, an adult Peter Pan or an elderly Scottish dame, Robin Williams had an utterly unique talent for entertaining and was truly one of a kind. Here are our favourite Robin Williams moments in tribute to the man who shaped many of our childhoods, and who will be greatly missed.

Williams played a Peter Pan who decided to grow up and forgot Neverland as a result, but when his children are kidnapped, he needs to remember all the magic of Neverland in order to get them back.

Click on the link to 'You Ain't Never Had A Friend Like Me' for the ultimate nostalgia trip. He was MADE for this role.

No one could have played the wild jungle man lost in a board game for 26 years quite like this guy!

The performance that won him an Oscar, Robin plays a psychologist who hasn't moved on since the death of his wife.

Winning the Oscar for his role

Mrs Doubtfire was about a recently divorced man who dresses up as a nanny to spend more time with his children and is possibly Robin's most loved role.

Comparing himself to Kim

Another iconic film from our childhoods that wouldn't have worked without the talent of Robin Williams.

Dressing up as a cheerleader in 1980

“They believe they’re destined for great things, just like you. Their eyes are full of hope, just like you. Did they wait until it was too late to make from their lives even one iota of what they were capable? “

…If you listen real close, you can hear them whisper their legacy to go. Go on, lean in. Do you hear it? Carpe. Carpe. Carpe Diem. Seize the day, boys. Make your lives extraordinary.”

Celebrities have flocked to Twitter to pay their respects to the larger-than-life actor.

Robin was as sweet a man as he was funny. If you're sad, please tell someone.

I can’t believe the news about Robin Williams. He gave so much to so many people. I’m heartbroken.

I am so heartbroken. Robin Williams was a light in my childhood. Rest in peace.

One of my all time favourites. Movies I grew up watching over and over again. A genius that will be so missed. R.I.P. Robin Williams.

Mr. Williams visited me the first day of filming The Parent Trap. I will never forget his kindness. What an enormous loss. My condolences.

I could not be more stunned by the loss of Robin Williams, mensch, great talent, acting partner, genuine soul.

I can't take the Robin Williams news. I've never cried over someone I've never met but I can't stop ????

"Robin Williams was an airman, a doctor, a genie, a nanny ... and everything in between. But he was one of a kind." —President Obama

Robin Williams made the world a little bit better. RIP.

Very sad, very upset, very glad I did not have to hear about this though Twitter. Probably going to be taking some time off it for a while.

#RIPRobinWilliams so heartbreaking.... thank u for the joy & laughter.... condolences, love and light to his family during this tragic time 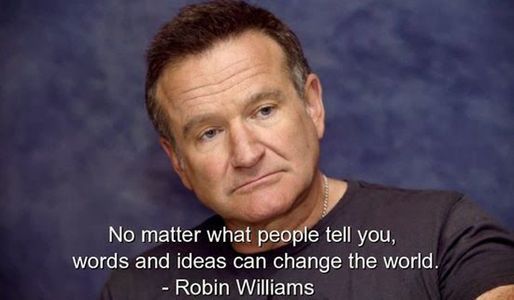 Have we missed your favourite Robin Williams moment? Tweet us @sofeminineUK