For better or for worse, we really thought the Twilight co-stars Robert Pattinson and Kristen Stewart would be spending Thanksgiving together. Rumours have been circling that the couple have hooked back up after splitting in August, as they have been seen recently at each other’s houses and they spent Dia de Los Muertos together. We also heard that Kristen wanted to cook Thanksgiving dinner for Rob now that they were reconciled. But apparently not!

It doesn’t look like Kristen Stewart and Robert Pattinson were thankful of their relationship this year as the two spent Thanksgiving apart!

Despite previous rumours that Kristen Stewart wanted to cook Thanksgiving dinner for her ex-boyfriend/current boyfriend (can we get some confirmation on this?!), there was no sign of the 27-year-old as she left her house yesterday with a gal pal to pick up some last minute groceries. 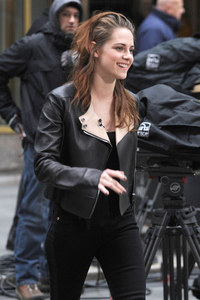 The two split up earlier this year when it was publicly revealed that KStew had an affair with director Rupert Sanders, however the two have been spotted together recently, sparking rumours that they have reconciled.
​
According to Hollywoodlife, the Adventureland actress apparently wanted to use the delicious turkey dinner to woo Rob back for good.

Mmmm Sherry trifle. Apparently she had also planned to make him British dishes that she knows he’d enjoy. The source continued: “She is also making a few dishes that Rob grew up with like Yorkshire pudding, cauliflower cheese and roasted parsnip.

“Kristen wants to really impress Rob and make him feel at home. She’s really putting her all into this dinner.”
Well, it might have been a bit of an effort for nothing then Kristen? Don’t worry, you still have Christmas!