Robert Pattinson is recently single after his split from Kristen Stewart earlier this year and so we're all keeping a beady eye on the goings on in his love life. But just as he's been spotted kissing a new girl, rumours have emerged that he had in fact grown close to his current and past co-star Caitlin Cronenberg - back when he was with Kristen!

Robert Pattinson is keeping everyone guessing about his love life after he was spotted kissing a mystery brunette in an airport in Canada.

People had suggested that the woman may be Caitlin Cronenberg, his Cosmopolis co-star.

But it has since been revealed that the lady in question was actually a crew member from his new flick Maps To The Stars, which he's filming in Toronto.

So why did everyone think it was Caitlin?

The pair were allegedly linked back when they were filming their first movie together.

Although she is now engaged to be married, back in the summer of 2011, she was not.

Radar Online claimed the pair were spotted "flirting" and were "growing close" - even though Rob was with Kristen Stewart at the time.

If the stories are true, it all took place before Kristen strayed with Rupert Sanders!

Interest in the Twilight hunk's love life shows no sign of dying down - and we're hardly surprised. Have you seen those Dior adverts?!

The 27-year-old has also been linked to his current co-star, Sarah Gadon, with a source claiming the couple's on-set chemistry was red hot.

​They claimed to Metro: "The pair are filming out in Toronto and they have an obvious chemistry. They laugh a lot.

"But they are also very serious about their work and have been discussing their roles and rehearsing loads together, one on one."

It appears after a long time with just one girl, Rob is taking the opportunity to be young, free and single.

This leaves a bit of a question mark over his alleged hook-up with Riley Keough.

A source told Hollywood Life: “With his schedule and his overall trust issues with girls due to his celebrity and what Kristen did to him, he and Riley are nothing more than friends with benefits.

“He considers himself single, but acts like a couple when he is around her.”

What do you think, making the most of the single life or still heartbroken? Tweet us @sofeminineUK 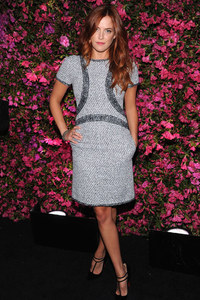