Robin Thicke and Paula Patton separate after 9 years of marriage

“Blurred Lines” singer Robin Thicke and actress Paula Patton have decided to separate, after over 20 years as a couple. The pair met when they were just teenagers in high school, and have long been very outspoken about their love for one another. Now, in a statement, the couple says they have mutually decided to separate but will remain the best of friends.

Another Hollywood couple has decided to call it quits. Robin Thicke and Paula Patton have decided to end their 9-year marriage.

In an exclusive statement to PEOPLE magazine, the couple says, “We will always love each other and be best friends, however, we have mutually decided to separate at this time.”

The two first met as teenagers in high school, when Robin Thicke was only 14. They were married in 2005 and now have a 3 ½ year old son, Julian Fuego.

Robin Thicke has often been very vocal about his love for his actress wife. In the September issue of Prestige magazine, he said, “I don’t know if I would still be alive in some ways if it wasn’t for Paula. She’s been my rock, my muse, my inspiration, and I love her.”

Everything You Need To Know About the Grammy Awards 2014
The biggest night of the year for music is almost upon us, and it looks like we’re about to be treated to some of the best tunes of 2014 with an amazing line up and a promise that all of the big names will be there. So who has been nominated? Who will be performing? When will it air? Fear not, we have all the information you could ever want for the night of great tunes and sobbing celebrities accepting awards! Miley Cyrus, you ‘re welcome to stay at home…if you want…

Despite their public declarations of love, the past year must have been hard on their relationship. Robin Thicke’s controversial music video for hit song “Blurred Lines,” caused quite a stir among feminist groups, and many thought it must have upset his wife. She says it did quite the opposite.

“I watched that video and I was a little bit jealous and then I wanted to jump his bones,” she says. “I was like, ‘I want to take you down right now.’ That’s how I know it’s a hit.”

Then came the infamous Miley Cyrus twerking VMA performance with Robin Thicke. Viewers were understandably shocked by the performance, but Paula seemed to be proud of her hubby.

“It’s just so funny,” Paula said during a sit-down with E! News last September, “because when I saw him perform I was like, ‘You guys killed it!’ We hugged each other, we went out, celebrated. The next day, my cell phone [has] all these texts: ‘Praying for you.’ ‘If you need to talk, I’m here.’” 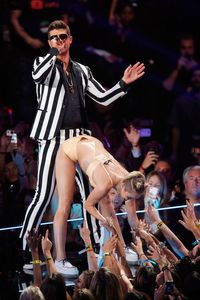 Since that performance, paparazzi pictures and rumors have been surfaced of Robin Thicke getting close to women other than his wife. Just days after the VMAs, a photo went viral of Robin provocatively touching a blonde mystery woman at a VMA after party. Then, in January, the singer was spotted getting very cozy with an unidentified woman in Paris.

Robin and Paula made their last public appearance together at the Grammy Awards, on January 26th, and seemed just as in love as ever with their usual red carpet PDA. Just a month later, the news of their separation comes as a bit of a shock to fans, but the two promise in their statement to remain close friends.

Did you see this breakup coming? Tweet us @sofeminineUK.

by the editorial team
+
All the news about Robin Thicke