If you haven’t been following Simon Cowell on Twitter, now is the time to start. It looks like Mr Nasty’s heart has grown three sizes since the birth of his son on February 14th, and his happiness is infectious! The music mogul has now shared several snaps of the newborn, who has been named Eric, and he really is adorable.

It looks like Simon Cowell is going to be an unbelievably doting dad, as he has already tweeted about his newborn son several time after he was born on Friday, including some beautiful baby photos. We never thought we could picture Simon as a father, but we are eating our words!

Announcing the birth of his little bundle of joy with girlfriend Lauren Goodyear, he wrote: “Very happy to say Eric was born and 17.45pm. Healthy and handsome. 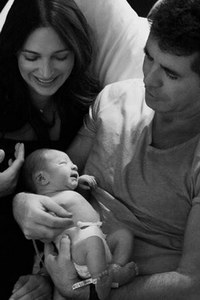 ​“Lauren in great shape. Thanks for all of your kind messages.”

Little Eric weighed 6lbs 7oz, and a source told the Daily Mail: “Lauren’s mother and sister were in the delivery room with them when she gave birth. Simon’s mother, Julie, is looking forward to meeting the baby in the UK.”

Simon’s close pal Terri Seymour also said: “I called him tonight and he is so excited. It really is all change for him, but he is ready. Eric is a great name. It is great that he picked that name in honour of his father. It is very touching. I can’t wait to see them all.”

The 54-year-old couldn’t resist telling us all about the baby name they had chosen, and tweeted: “Named after my dad.”

Only yesterday did he begin to start tweeting photos of the little man, and we can’t believe how at home Simon looks as a daddy! He captioned one picture: “Mum, Dad and Eric. Now two days old”, followed by: “…now you can see how very handsome little Eric is.”

We thought our hearts were already melted with how cute Simon was being until he posted one more of him holding Eric to his chest with the caption: “I never knew how much love and pride I would feel.” AW SO CUTE.

Simon Cowell opens up about becoming a father