Taylor Swift finds it easy to keep her clothes on

Taylor Swift is setting herself apart from other celebs her age. In a recent interview, the Red singer says she never feels the urge to take her clothes off, and instead chooses to be risky through her lyrics. Since the young singer has already won several Grammy’s and had countless No. 1 hits, it seems her version of risky leads to success!

Taylor Swift definitely believes in being risqué, but probably not the way you think.

The starlet is gracing the March cover of Glamour magazine and has opened up about what she believes it means to take risks while still being a role model.

“I find it relatively easy to keep my clothes on because I don’t really feel like taking them off,” Taylor tells Glamour. “It’s not an urge I have. For me ‘risky’ is revealing what really happened in my life through music. Risky is writing confessional songs and telling the true story about a person with enough details so everyone knows who that person is. That’s putting myself out there, maybe even more than taking my shirt off.” 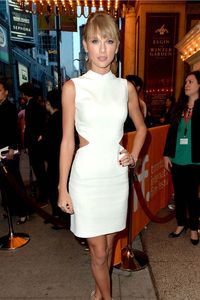 And Taylor is certainly known for putting herself out there through her songs. She has become infamous for writing songs about her famous exes, like Harry Styles and Taylor Lautner.

One thing is certain after hearing all her songs about relationships: when it comes to love, Taylor does not like losing.

“I think everyone should approach relationships from the perspective of playing it straight and giving someone the benefit of the doubt,” she admits. “Until he establishes that this is a game. And if it’s a gam, you need to win.”

While some people may not like Taylor’s approach to songwriting, she says she is not planning on changing anytime soon.

“I’m not trying to shed my skin,” she says. “I’m trying to be a new version of the person I’ve been my whole life. That’s what’s held my fans and me together. For a group of millions, it’s odd how close I feel to them.”

What do you think of Taylor’s outlook on relationships? Tweet us @sofeminineUK.