Taylor Swift's sexy new look has sparked rumours she may have had plastic surgery.

The country music singer stepped out at the People's Choice Awards in a super low-cut dress that showed off an impressive cleavage last week.

And at the Golden Globes, Taylor's backless DKNY gown struggled to contain her breasts. 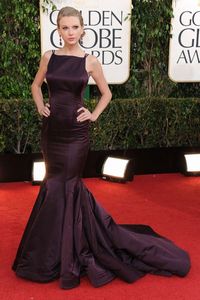 Now, In Touch magazine is reporting that the 23-year-old is rumoured to have "received a bust boost back in April".

Plastic surgeon Dr Michael Fiorillo, who has not treated the star, claims Taylor's boobs went from an A cup to a B.

And after looking at a photograph of her in her People's Choice dress, he said: "You can see the implants."

But there is no proof that Taylor went under the knife and perhaps it's just a growth spurt that's added volume to her chest.

Taylor will no doubt have wanted to look her best at the recent award ceremonies to show ex-boyfriend Harry Styles what he's missing.

The couple split up just after New Year following a huge row on holiday in the British Vigrin Islands, with Taylor abandoning the trip just three days in.

She's now back in the recording studio and making music, reportedly penning a number of songs about the 18-year-old One Direction star.

A source told The Sun: "Taylor writes music in the same way that other women chat to their friends on the phone. It's been how she deals with her emotions for most of her life.

"Harry and Taylor only dated for a short time but there were very strong feelings, so it's been a tough comedown."