Taylor Swift wasn’t one of the official models walking the runway at last night’s annual Victoria’s Secret Fashion Show, but you wouldn’t know it by looking at her. The pop star flaunted her flawless features and long legs in a short, tight Union Jack mini-dress – with custom-made Nicholas Kirkwood lace-up booties to match and a top hat fascinator. Wow! Looking good Swifty!

The only thing distinguishing Taylor Swift from the Victoria’s Secret Angels at last night’s Fashion Show was the microphone in her hand. With her natural beauty, height, fab figure, and shiny blonde hair, she could easily pass for one of the lingerie models.

Instead, though, Taylor brought her vocal chops to the table, singing her hit I Knew You Were Trouble. As she sang, the Angels, including Candice Swanepoel, Behati Prinsloo (Adam Levine’s fiancée), Alessandra Ambosio, Karlie Kloss, Adriana Lima, and Cara Delevingne, strutted their stuff down the runway.

​She high-fived Cara as they sashayed side-by-side. These stunners may have been scantily clad, but we happen to know their off-duty fashion is just as gorgeous.

Taylor also joined Fall Out Boy for a performance of My Songs Know What You Did in the Dark (Light Em Up).

​Before the show, Taylor walked the red carpet in a sparkly floral Zuhair Murad mini dress.

In keeping with that last theme, Taylor re-emerged in a stunning sparkly silver shift dress with intricate vine-like Nicholas Kirkwood sandals, also in a glittering silver. Faux snow fell softly from the ceiling, topping off the indoor winter wonderland.

So many sexy looks were sported!

Which one of Taylor’s looks do you like best? And who’s your favourite VS Angel? Tweet us @sofeminineUK!

Here are a few more sexy looks from the show! 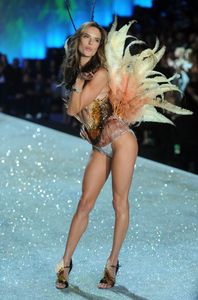