Actress Emma Roberts shocked the world when it emerged that she was arrested for attacking her boyfriend Evan Peters last week. The charges have since been dropped and it seems the pair are still together, as she was seen crying in his arms after he refused to co-operate with the police and their investigation.

Emma Roberts has been snapped crying in her boyfriend Evan Peters' arms a week after she was arrested for alleged domestic violence.

The 22-year-old was clearly in bits as she held on to her boyfriend.

The snaps were taken on Tuesday, just hours after the story of their fight broke.

The incident allegedly occurred last week and Emma was taken into custody on 7th July in Montreal, Canada.

According to TMZ, the police were called to the couple's hotel room after guests reported a disturbance.

When cops reached the scene, they reportedly found the American Horror Story star with a bloody nose.

Emma - niece of Julia Roberts - was then arrested for attacking him.

She was later released after Evan chose not to press charges against her.

There had been reports that she had left bite marks on her partner, which have since been denied.

The couple started dating in 2012 and share a volatile relationship.

Sources told Us Weekly that the pair have a "passionate" romance, which is fuelled by drama.

The insider said: "Emma is very dramatic; she gets wound up during arguments. When they are good, they are crazy in love."

They are still together and trying to work through their problems. 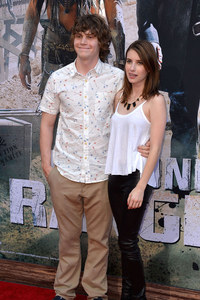