by Emmy Griffiths Published on 6 March 2014 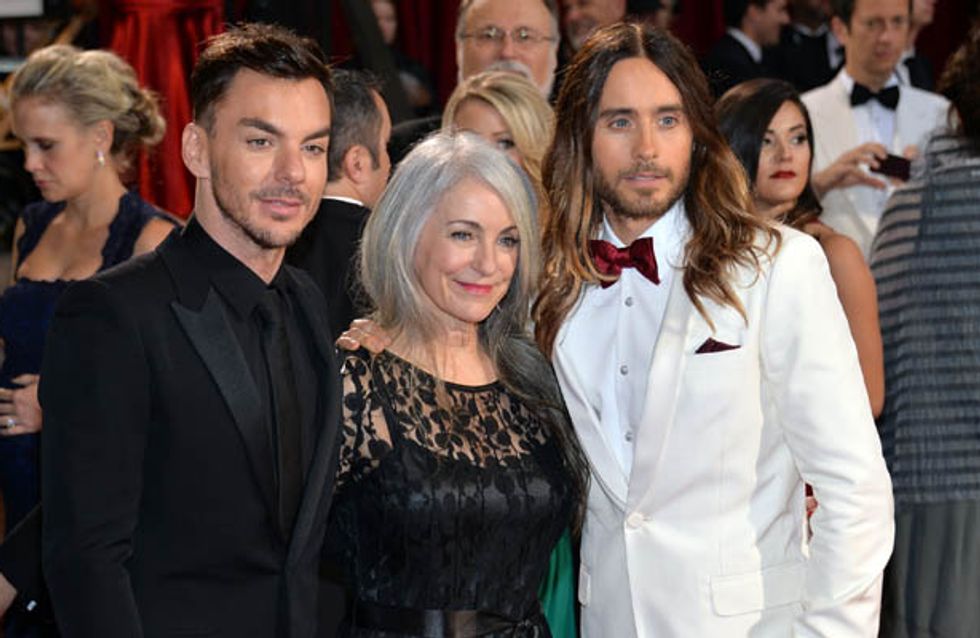 Even with a world of women falling at their feet, there are plenty of celebrity mummy's boys out there, but which dashing Hollywood hunks would ditch you at an Award ceremony in favour of their mother? A surprising amount, as it turns out…

Bradley Cooper still lives with his mum, Gloria, in Los Angeles after his father died from cancer. He thinks living together in close quarters has helped them both with his passing. However, apparently the situation isn’t without it’s problems. He told Details magazine: “It’s not like I live in a compound and she’s in the guesthouse. No. She’s in the next room. But here’s the thing. She’s a cool chock. We can hang, and she can roll with the punches.”

Jared Leto pretty much dedicated his speech to his mother and it was just so lovely. He had also taken her to the Oscars, and gave her a slice of Ellen DeGenere’s Hollywood pizza when she got a little peckish. What a sweetheart!

Leo loves his momma, and bought her a house with his Hollywood earnings, bless him. Irmelin handles all her baby boy’s finances, and after performing in Blood Diamond, he said in an interview that the only person he would ever buy a diamond for is his mother. Naw.

When Ashton Kutcher punks Justin Timberlake by setting up that his house was being repossessed, his first instinct was to call his mother and told her to get over there as soon as possible. Sometimes you need your mum to sort our life out, okay?!

Zefron’s mummy was there to help him with the paparazzi, taking his arm and leading him through whilst grinning widely and obviously enjoying that so many people have confirmed her long-suspected beliefs that her son is the absolute greatest. We’d be proud too Starla!

Shia LeBeouf gets creepy describing his affection for his mother. He said: “Probably the sexiest woman I know is my mother. She’s an ethereal angel. Nobody looks like that woman. If I could meet my mother and marry her, I would. I would be with my mother now, if she weren’t my mother, as sick as that sounds.”

After Dappy became very annoyed at being called sexist by Luisa Zissman, he said: “You don’t go round calling people sexist, when you don’t know nothing about them. Women make the world go round, what would we do without our women, our beautiful women, what would we do. I’m a mummy’s boy for gods sake.”

Self confessed! He admits it! Even though his mum did say she was “embarrassed” by his antics in the Celebrity Big Brother House. Awkward.

They might not be speaking to each other, but these two lurve their mum. It was Peggy who bought Noel his first guitar, and when Liam’s partner Patsy walked out on him, guess who moved in to cheer him up? We love ya Peg!

Robbie dedicated his Frank Sinatra concert at the Royal Albert Hall to his mother dearest and took her to the world premiere of his film Nobody Somewhere. Janet is one lucky lady!

Is being a mummy's boy cute or a bit of a deal breaker? Tweet us @sofeminineUK