The Saturdays’ singer Frankie Sandford is the latest member of the girl group to pop out a sprog! Congratulations to the new yummy mummy as she gave birth to a healthy baby boy this morning. Frankie and her football-playing fiancé Wayne Bridge have named their little tot Parker Bridge – all together now, awwww!

Wayne Bridge and Saturdays’ singer Frankie Sandford have welcomed a little boy into the world.

The delighted couple to took Twitter to announce the wonderful news, revealing that Frankie gave birth to their first son together in the early hours of the morning.

They’ve named the newborn Parker and he has been given dad Wayne’s last name.

The proud parents are clearly over the moon about their new arrival and the 24-year-old singer couldn't wait to share the exciting news with fans today.

Frankie tweeted: “Wayne and I are so proud to say our little boy Parker Bridge was born this morning. 7lb 13oz. All doing well and absolutely besotted.”

Wayne and I are so proud to say our little boy Parker Bridge was born this morning. 7lb 13oz. All doing well and absolutely besotted ❤😍️

While fans of The Saturdays are excited with the latest mini-Saturday, no one is more happier than Frankie’s bandmates.

They immediately took to Twitter to congratulate the brand new mum.

Una Healey, who gave birth to daughter Aoife Belle in March 2012, gushed: “Huge congratulations to @FrankieTheSats and Wayne on the the birth of their darling baby boy Parker, so so excited to meet him! X.”

Weirdly baby Parker and 1-year-old Aoife already have something in common, as Una went on to reveal: “AND he was born the exact same weight as Aoife Belle! 7lb 13oz! aw x.”

Mollie King – who is one of the few Saturdays to not have had a kid yet – was equally as excited.

She wrote: “So unbelievably happy for @FrankieTheSats & Wayne on this incredible day! I need to meet little Parker, I can’t wait! I love him already.”

Vanessa White also joined in on the Twitter love-in, adding: “@FrankieTheSats a massive congratulations to you and Wayne!! I'm so excited to meet Parker!!! wooo!! Xx.”

Rochelle Humes – who no doubt had her hands full with her 5-month-old Alaia-Mai – was the last of the girlband to send her best wishes.

She said: “Massive congrats to @frankiethesats and Wayney! The best text to wake up to this morning...lock up your daughters Parker Bridge has arrived.”

Parker is Frankie’s first child, while Wayne is already father to son Jaydon from a previous relationship.

The couple announced their engagement in April, not long after revealing she was expecting their first baby.

Does this mean there will be wedding bells for the happy couple soon?

We hope so – especially as little Parker can be the ringbearer and Aoife and Alaia-Mai can be cute little flower girls! 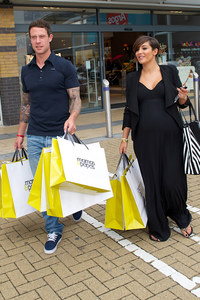