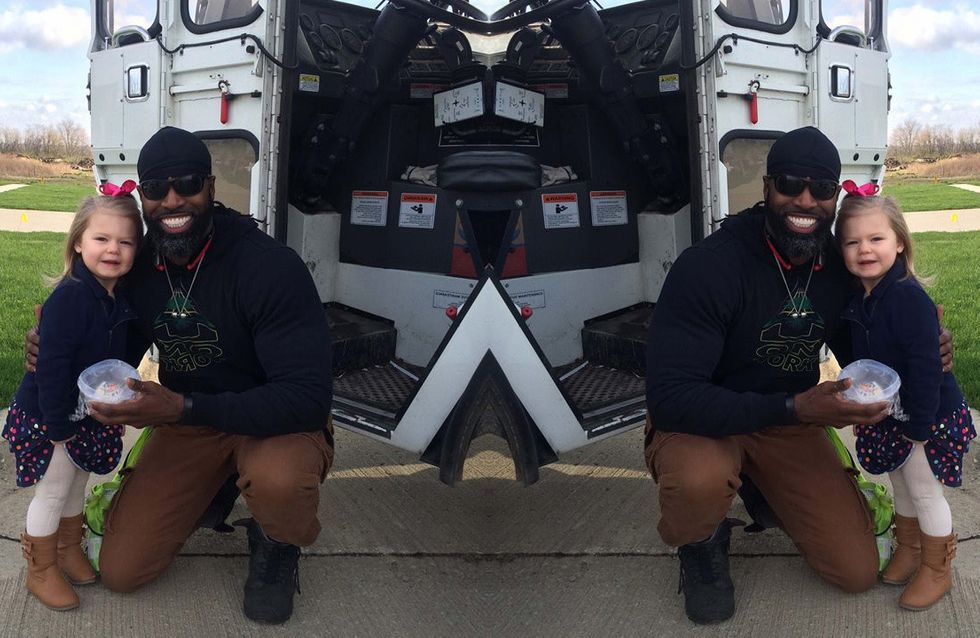 Brooklyn Andracke, a 3-year-old from Illinois, has been melting hearts all the world over after giving one of her birthday cupcakes to her favourite binman Delvar Dopson, after a year of waving at each other from the end of her driveway. Tearing up is our middle name.

Every Thursday morning, Traci Andracke stands outside her home in Bloomington, Illinois, with her daughter Brooklyn, waiting for the opportunity to wave to Brooklyn's favourite binman, Delvar Dopson. In a post to The City of Bloomington's Facebook page, Traci said "Every... Thursday, my heart is full when I see the joy that our amazing garbage man brings Brooklyn when he honks and waves at her with a BIG smile."

Sometimes, if they miss Delvar, Traci will even drive around the neighbourhood looking for him so Brooklyn can get the chance to wave to her hero who, in turn, always smiles and waves back.

A couple of weeks ago it was Brooklyn's birthday, and to celebrate she wanted to give one of her cupcakes to Delvar. So Traci wrapped up one of Brooklyn's birthday cupcakes, and they waited outside for Delvar. When he pulled up in his truck, Traci motioned for him to pull over. When he got out of the truck, nerves got the better of Brooklyn as she silently handed Delvar the cupcake. Her mum took over, explaining to him that he made their day every Thursday, and it had become a special day for the two of them.

To their surprise, Delvar said that he always looked forward to seeing them too, and that he tries to get out of his meetings early on Thursdays just so he can wave to Brooklyn. In her message on the official Bloomington Facebook page she left a message for Delvar: "Thank you for the joy that you bring Brooklyn every Thursday morning, for making her birthday special, and for making my heart happy. It may be a little thing that you do, but it means so much to us!"

A week or so later, ​Traci followed up her first post with a cheery update that said the next thursday, Delvar pulled up at their house with Frozen toys for Brooklyn. She also had something for Delvar - a homemade 'Thank You' sign, which he vowed to keep in his truck. It's all just too much for our hearts to take, tbh.

The heartwarming story has attracted attention from around the world, and Traci's original post has had over 14,000 likes and 2,000 shares. Delvar said of the sitch: "It doesn't matter if I'm a garbage man or if I'm a CFO at State Farm. We all have to discover our gift and be effective. I mentor children and that is the passion in my heart." N'awww!

​Listen Up, Mums-To-Be! We Found The Best Non-Alcoholic Wines For You To Try