by the editorial team Published on 4 April 2014 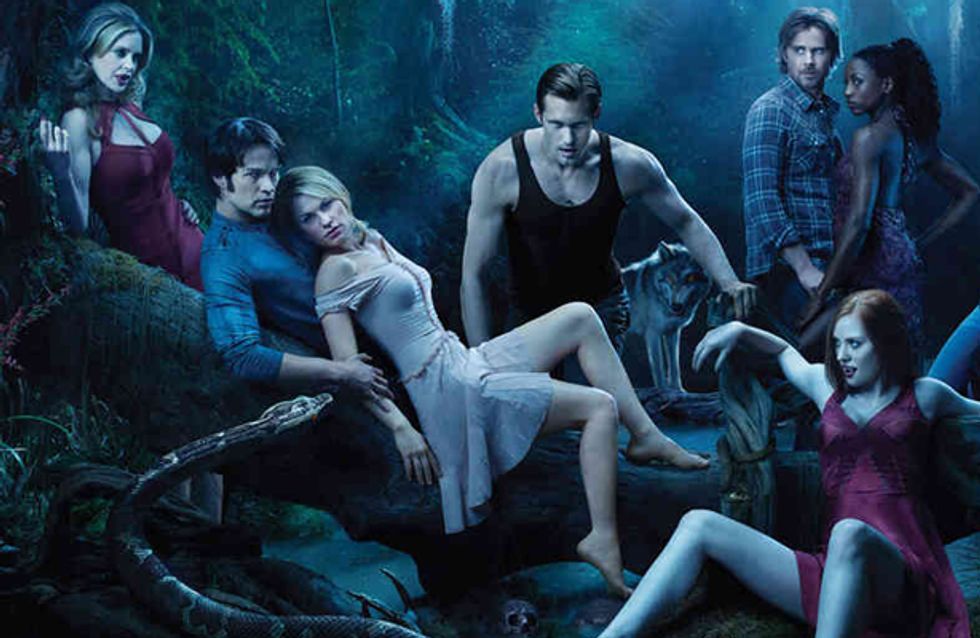 HBO loves to tease their fans with the most cryptic and tantalizing trailers ever, and their newest teaser for True Blood is no exception! Who will meet their death in the final season?

True Blood fans, rejoice! HBO has announced that our fave guilty pleasure show will be back in action for its seventh and final season on June 22nd. The teaser trailer for the upcoming season gives nothing away on the future plot, but instead looks back at all the characters we've lost so far, from Sookie's sweet grandmother all the way up to Terry Bellefleur (sob).

Death is part of the everyday with this show (vampires, duh!), so we know in this final season, some of our favorite characters will probably be saying goodbye for good. Who do you think will meet the true death before the series finale? We've got our predictions!

Last we saw our beloved Norse god, Eric Northman, he was tanning himself on a snowy mountain top when his sunproof abilities disappeared. Will Pam make it in time to save her maker and our fave vampire hunk? Or will Eric meet his true death burning to a crisp in the snow? We'll have to wait and see (please be alive!).

Over the course of the series, Bill has gone from broody vampire with a heart of gold, to lying manipulator, to thinking he's a god, to well you know. At this point, we're not sure if we want Bill to stick around or meet the true death, though freeing our vampy friends from prison certainly added a point in his favor!

Pam can't die! Pam has been the source of endless one liners, great fashion, and harsh truths throughout her time on the show, and if she gets anywhere near truly dying, fans may honestly revolt.

The one romantic relationship we're seriously rooting for on this show? Tara and Pam! No matter what happens to the rest of the characters, these two need to end the show with some serious alone time, away from all that small town drama.

Jason is one of those characters who've had you wondering, "How have you survived this long?" Sure, he knows his way around a gun and wooden bullets, but let's be honest: he's been surviving on his good looks and charming personality alone. Only so long that can last!

At the end of the first season, showrunners stayed true to Charlaine Harris' original book and ended things with an unidentified body lying dead in the backseat of a car. In the book, Lafayette is the unfortunate victim, and during the show's hiatus between season one and two, fans nearly started a riot. Lafayette couldn't die! Lucky for us, he has been a series regular ever since. What has changed since the season one finale and now? Absolutely nothing-Lafayette is a survivor!

Alcide is so tormented by his own wolfy nature that it's honestly a surprise he doesn't just shut himself away in a closet somewhere. He flips between being the sweetest guy you know to being a burly wolf pack leader and back to being a buff sweetheart. He's strong enough to survive the supernatural world, but will he ever be able to accept himself?

Sam is one of the few characters who has actually stayed a good person throughout most of the show. He is there for Sookie, even though she knows she will never really fall for him, and he's a good friend to everyone. While we wish all the best for him, you know what happens to the good people on this show? Let's just put it this way: his sweet girlfriend Luna died.

Oh Arlene. She's another one of those characters that makes you scratch your head that they're still alive. She's completely lovable, but a bit of an airhead. In the first season, she is ready to marry a psychopathic serial killer, then she has said serial killer's baby, then goes on to marry Terry, who while being a sweetheart had a serious death wish that finally came true. When the diseased vampire horde comes marching in to town, we doubt she'll have the know how to survive.

Sarah is only alive by the grace of Jason Stackhouse. Every fan out there was screaming at him to pull the trigger and kill that evil woman, but Jason was too good of a person to kill someone in cold blood. There's no doubt Sarah will meet the true death this season, but the question remains: who will get to do the honors?

What can we say about Sookie Stackhouse? She somehow manages to get two insanely gorgeous vampires to fall in love with her. While they both certainly had their problems, they loved her, and she literally threw them out of her house. Then, she finds potentially the perfect boyfriend in Alcide, but will that last? Most likely not. Sookie will probably survive the final season, since she is the main character, but we're sure most fans would like to see her gone.

How do we feel about Sookie? Let's leave it to Pam to explain...

Who do you think will meet the true death in the final season? Are you sad to see True Blood go? Tweet us @sofeminineUK!