Oh, to shake hands with Brangelina! Angelina has spent month's in Australia directing her new film, Unbroken, and as the couple arrived at the film's wrap party, they were greeted by swarms of adoring fans. And did the superstars simply walk past? No, they stopped and shook hands with all their fans before continuing on inside. How awesome are these two!

The pair arrived at the wrap party for Angelina’s film Unbroken, at the Sehipwrecked Seafood Bar & Grill in Airlie Beach, Australia, and were welcomed by screaming, adoring fans. Though the couple sweetly held hands the entire walk in, they did stop to shake hands and greet their fans.

The pair looked comfortable and classy, with Angelina sporting an all black outfit with strappy heels, and Brad in a beige shirt with khakis and combat boots. They seemed happy as can be, smiling and laughing the entire time.

Brad stayed close to Angelina’s side, holding her hand or keeping his arm around her wast, as the pair posed for pictures and chatted up fans.

Sources say that the film’s writers, Joel and Ethan Coen, as well as Australian actor Jai Courtney and British actor Jack O’Connell, who stars in the lead role, were also in attendance at Tuesday’s party.

Brad and Angelina reportedly called it a night before the rest of the crew, heading out of the venue at 10:30 p.m.

Angelina has spent the past several months in Australia directing Unbroken, a new film about Louis Zamperini, an Olympic runner who was held prisoner by Japanese forces during World War II. 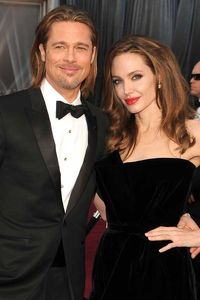 After attending the Producers Guild Awards in Hollywood two weeks ago, Brad flew down to Sydney, Australia, to reunite with Angie and their six children. He has stayed down under since then to support Angelina and spend time with his family.

How cute are these two? Are you looking forward to Ange's newest film venture? Tweet us @sofeminineUK.